‘No valid reason’ to pursue board in courts, says council’s head of planning despite councillors voting for legal action over Raheny development 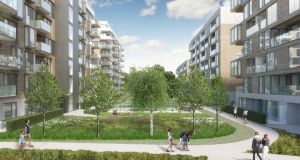 An image of the development of 657 apartments in blocks up to nine storeys beside St Anne’s Park in Raheny, Dublin

Dublin City Council will not pursue a judicial review of Bord Pleanála’s decision to grant more than 650 apartments beside St Anne’s Park in Raheny, despite councillors having voted for the legal action.

The council’s head of planning, Richard Shakespeare, said he could see “no valid reason” to pursue the board in the courts in relation to its decision last month to grant permission to Crekav, a subsidiary of developer Pat Crean’s Marlet Property Group, for the large apartment development.

Councillors on Monday night voted unanimously for the council to apply to the High Court for a judicial review of “the validity of the decision” on a number of grounds, including “a lack of consideration of Dublin City Council’s reasons for recommendation of refusal” that it was “contrary to development plan zoning objectives”, and “on lack of consideration of scientific evidence, including national and EU protected species and EU habitats directive”.

The board approved the development of 657 apartments in blocks up to nine storeys, along with almost 500 parking spaces, on former playing fields east of St Paul’s College beside the park despite opposition from Dublin City Council and locals.

The controversial apartment-only scheme replaced earlier plans for houses and apartments on the site, which had been the subject of a judicial review, not by the council but by local residents and environmentalists.

While the council had recommended the board refuse permission for the 657 apartments, Mr Shakespeare said he could see no basis for the council to seek a judicial review of the decision.

“Initiating legal proceedings is an executive function, and I can see no valid reason to do so. Yes, the council and the board had a difference of opinion – we gave our opinion and made our recommendation and we also sent the board the councillors’ opinions and recommendations, but that is not a reason to seek a judicial review.”

Green Party councillor Donna Cooney, who proposed the motion to take the legal action, said she expected the council management to give “good consideration” to the prospect of taking a judicial review.

“The council has already taken a case against the board and won; this would be similar in that the council recommended refusal, but permission was given by An Bord Pleanála. ”

Last month the High Court quashed Bord Pleanála’s decision to approve developer Johnny Ronan’s 13-storey tower beside Salesforce’s Dublin docklands headquarters. Dublin City Council had taken judicial review proceedings in what was its first legal challenge to a grant of planning permission by the board.

Mr Crean said he hoped the challenges to the Raheny development were now at an end, and said he intended to “immediately” start work on the apartment development.

“This land has been zoned for housing for 15 years. I would never have bought the land if it wasn’t zoned,” he said.

He said opposition to the development had ranged from the land not being appropriately zoned, to the displacement of a sports club, to environmental concerns, to claims the development was being built inside the park.

“I think I have been fairly tested over numerous issues over several years, and I have answered every question that’s been asked of me. It seems to be popular to say you oppose housing. When is it going to be popular to support housing?”