Irish Water estimates 180,000 homes could be affected by the potentially harmful pipes 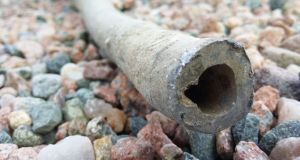 A means-tested grant scheme to support the replacement of lead pipes was introduced in 2016. File photograph: Frank Miller

Only 105 households have made use of State grants to replace potentially harmful lead pipes in their homes since a scheme was set up four years ago, new figures show.

The low uptake is despite Irish Water writing to 38,000 householders advising them to check pipes in their properties for lead and estimating that 180,000 houses across the country could be affected by the issue, particularly those built before 1980.

Homeowners can apply for the grant to their local authority, which then recoups the money from the Department of Housing.

Dún Laoghaire-Rathdown County Council has processed two applications for the grant, one in 2017 and one last year.

Fingal County Council has received just one application in four years. A council spokesman said that “in light of GDPR” the council could not confirm if the application had been successful, but it was not included on the list of grants paid issued by the Department of Housing.

Figures released by Irish Water to the Irish Examiner in January showed 23 home water supplies across the country had lead levels above the legal limit in tests carried out last year.

Although 10µg/l is the legal limit for drinking water supplies, the World Health Organisation advises that there is no safe level. Consumption of lead can affect the brain development of children and infants. It may harm kidneys, may contribute to high blood pressure and has been linked to cancer.

Department of Housing figures show just under €264,300 has been paid out in the grants since 2016. Limerick City and County Council issued €104,300 of that in 29 grants. Dublin City Council processed 23 successful applications, securing grants worth €33,550.

The number of grants issued doubled last year to 32, from 16 in 2018, when councillors expressed concern at the low uptake of the grants. Two of the 105 payments issued since 2016 were made in 2020, one from Dún Laoghaire-Rathdown council and one from the Limerick local authority. Roscommon County Council has paid out one grant.

Nine of the 31 local authorities have not issued any funds through the scheme.

Irish Water engaged with the Economic and Social Research Institute (ESRI) to research different ways of communicating the risks to households and improving take-up of measures to reduce exposure to lead. An ESRI researcher said it was waiting for Irish Water to initiate a trial it had proposed.

A spokeswoman for Irish Water said the water that leaves its treatment plants is lead-free and there are no lead public water mains in Ireland.

However, many old “service connections” – the pipes running from the public mains to houses – contain lead. By the end of 2019 Irish Water had replaced nearly 32,000 of these with plastic pipes.

The spokeswoman said that as of the end of 2019, just in excess of 920 homes had availed of a customer “opt-in” scheme whereby the utility replaced the lead service connection outside their home free of charge, once the internal plumbing had been addressed. The households could then apply for the grant to recoup some of the cost of fixing the internal plumbing.

A Department of Housing spokeswoman said Irish Water hoped to remove lead from the public supply network completely by 2026.

The spokeswoman said that, in the interim, “where necessary” Irish Water can treat water with orthophosphate. “This will build up a protective coating inside pipes and reduce the lead dissolving into drinking water supplies.”

Orthophosphate is described by Irish Water as a “food-grade product and is a clear, odourless liquid”.