Interim scheme between Phoenix Park and the Custom House will cost €800,000 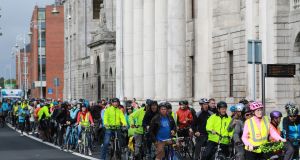 Plans to begin the implementation of the Liffey cycle route, first proposed almost eight years ago, were approved by Dublin City councillors on Monday evening.

Traffic lanes will be removed and parking eliminated along parts of the quays so space can be reallocated to cyclists.

However, while the route will be continuous on the north side of the river, the council said it has not been possible to achieve this on all of the south quays, with the section between O’Connell Bridge and the Civic Offices at Wood Quay to be left without a dedicated lane until 2024.

The route for the 5km path was selected by the National Transport Authority (NTA) last April. It emerged later last year the route would not be completed until 2024, at the earliest. In response to the delay, cycling campaigners set up a petition calling for the council to trial a two-way cycle path on the north quays only.

However, instead of undertaking a short-term trial, the council will implement as much of the NTA’s planned route as possible, and keep this interim scheme in place until the permanent scheme is completed.

The full NTA route - from the Phoenix Park in the west to the 3 Arena in the east - was expected to cost more than €20 million largely due to the engineering work required on the sections of the quays where there is limited road space.

The interim scheme, which will be progressed in phases from now until August, will concentrate on the section between the Phoenix Park and the Custom House, and cost €800,000. It will largely involve re-allocating existing road space to cyclists using lane separators, known as “orcas” along with vertical flexible “wands”.

There will be no major alteration of bus stops and no reduction in footpath widths, car traffic will not be removed from any section of the quays, and access to car parks will be maintained.

Where there is only one general traffic lane, the council has decided it was “not feasible” to remove it. This means that Aston Quay on the southside, Crampton Quay, Wellington Quay, Essex Quay and Ushers Island will not have segregated cycle lanes.

The measures will be implemented between now and August.

The council’s transportation department presented eight different “preferred routes” for the path from 2012-2017, but couldn’t secure the sanction of councillors for any of them. In 2017, after more than €360,000 had been spent on the project, the NTA suspended funding and said it would take over the decision making. Last April it published its plan, but late last year said it would not be possible to implement the scheme until 2024.