No change to public access at Luggala Estate, say owners

Trust controlling lands says gate near public road to close from 5.30pm over ‘duty of care’ 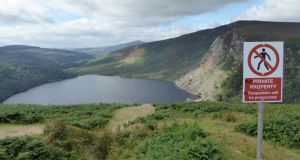 The trust which owns the large Luggala Estate in Co Wicklow has insisted there is no change regarding public access to certain areas within its grounds.

The trust has also defended erection of signs on the property in recent months.

Luggala is a private estate owned by the trustees of a Guinness family trust for many years and was the former home of Guinness heir and co-founder of Claddagh Records, Garech Browne, who died earlier this year. It is up for sale.

The estate is controlled by the trustees of Barbican International Corporation, based in Guernsey.

“There are no public rights of way or rights of access to any of the estate. However, successive owners over recent years permitted public access to certain parts of the estate via the present pedestrian access gate,” said the trust.

The number of visitors to the area since Browne’s death has “increased considerably”, according to the trust.

It said the owners had a duty of care regarding the estate. Consequently, a decision was taken to erect signage confirming that Luggala is private property and that the pedestrian access gate beside the public road would be closed from 5.30pm each day. This was a common practice in similar settings over privately owned land, the trust added.

“The terrain at Luggala is mountainous and there are many exceptionally steep and unsafe sections,” it noted. “The present signage represents a guide to the public to those areas of the estate which continue to be accessible at the permission of the current owners of the estate. They also mark points of exceptionally steep and dangerous fells immediately adjoining the public road above.”

There were, however, specific sections of the estate that have never been accessible to the public, it noted. “It is around these sections that the current signage has been erected as a clear indication of these private areas of the estate.”

But former Green Party TD and environmental activist Roger Garland has taken exception to the latest signage. He believes it could only damage relations between the owners and people in the local and hill walking community.

He said the “anti-walker” signs had serious health and safety implications because the walking route, as well as accessing Lough Dan, “provides access to two mountains, Fancy Mountain and Knocknacloghoge”.

Mountaineering Ireland has called on the Government to acquire 4,000 acres of the estate, overlooking Lough Tay, for public recreational use. This land is adjacent to Wicklow National Park and has significant scientific and biodiversity value.

The National Parks and Wildlife Service has recommended the State buy that portion of the property because of its “strategic importance” and tourism potential. But the quoted price for the entire 5,000-acre estate, including Luggala Hunting Lodge , is €28 million.

Browne famously entertained celebrated musicians, actors and writers at the lodge, a Regency Gothic house restored inside and out by its long-time custodian .

Browne’s mother Oonagh first turned the valley and its one-time shooting lodge – built by the La Touche family who founded Bank of Ireland – into a cultural haven for artists. The biggest loss she suffered was Tara, her younger son, who was killed while speeding through London in a car at the age of 21.

The Beatles, who knew him as a bright young thing around town, immortalised him in A Day in the Life, at the heart of their Sgt Pepper’s album.

The remains of Tara Browne and other members of the family are buried at a Doric temple in Luggala.

Mother and baby homes report did not have ‘level of workmanship’ needed, Seanad hears 22:13
Government TDs express support for ‘zero-Covid’ strategy 22:03
Q&A: What are the new Covid travel rules and how will they work? 21:57
Travellers ‘are treated like dirt’, Seanad is told by Senator 21:36
Tributes as Cork-born soprano Cara O’Sullivan dies aged 58 21:33