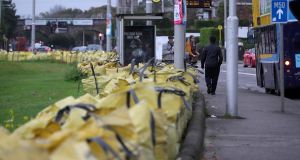 Flood defence barriers up to 1.6 metres tall (5ft 3) are to be built along 3km of the Clontarf coast in Dublin, more than seven years since the last flood protection measures were rejected by residents.

The new defences are expected to cost €10 million, more than twice the cost of the flood defence plan scrapped in 2011. About 400 properties remain at “significant risk of flooding”, Dublin City Council said.

The council secured planning permission from An Bord Pleanála in 2008 to build flood defences up to 2.75m (9ft) involving earthen embankments and walls at a cost of €4 million.

Following objections from local residents, the council offered to reduce the height of the protective embankment to 2.17m (7ft), the lowest height permitted by An Bord Pleanála.

However, despite having been hit by an “extreme tidal event” in February 2002 and a less severe one in October 2004, both of which caused damage to homes and businesses, residents opposed this reduced barrier.

The council said it received more than 2,000 submissions which had been “virtually wholly opposed” to the project going ahead even in its modified form. Locals had described the defences as a “cheap and nasty solution” and an “eyesore” .

Large yellow sandbags have been left in place along the Clontarf Road since.

The new plan will involve building a flood wall next to the roadside footpath instead of next to the coast, leaving the linear “promenade” park in between. While this will be the format for most of the length, at some sections, most notably near Vernon Avenue, the wall would run along the centre of the park lands approximately equidistant between the road and the sea.

No earthen embankments will be built, but the height of the wall will range from less than a metre to 1.642m or 5ft 3 tall.

“The concept being that when the primary wave breaks on the existing sea wall some of its energy is lost, and the promenade area starts to fill up. It will eventually fill with water in front of the sea wall and secondary waves can propagate towards the second defence beside Clontarf Road,” the council said.

The project would require the redevelopment of the promenade, half of which would be “disturbed” during the construction of the wall, the council said. The existing cycle path, laid out in the early 1990s, will also have to be reconstructed, according to the council.

It intends to lodge a new planning application with An Bord Pleanála next year, more than 10 years since it received permission for its last flood defence scheme.

The flood defences will cover a 3.3km area between the Alfie Byrne Road to the Wooden Bridge and will not affect the recently installed cycle path which runs for approximately 2km from the Wooden Bridge to Causeway Road in front of Bull Island.

Residents had complained that the new wall at this section was higher than agreed and the council has recently completed work to lower the wall by up to 30cm along a half a kilometre stretch opposite St Anne’s Park.