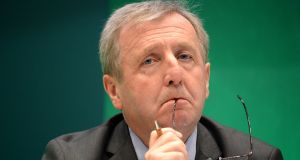 While we already have an efficient and productive agricultural system, there is no room for complacency, Minister for Agriculture Michael Creed said at COP24 on Wednesday. File photograph: Dara Mac Dónaill

The agriculture sector was sometimes treated harshly because of the carbon emissions its generates, but the issue is being addressed and there is recognition of the need to do more, according to Minister for Agriculture Michael Creed.

Speaking during a visit to the COP24 climate summit, Mr Creed said agriculture had to play its part in addressing food production for a growing global population while also being in line with the objectives of the Paris agreement on climate change.

The best term to encapsulate the new approach was “sustainable intensification”, he said. As the first Irish Minister for Agriculture to attend a COP, he was pleased to engage with the industry and stakeholders, while also recognising “we need to up our game” on decarbonisation.

Such an approach was demanded by the marketplace, and in light of Ireland exporting 90 per cent of what it produces. That was especially true in higher value markets. Customers were no longer asking about food safety and traceability, but about antimicrobial resistance, animal welfare and sustainability, he added.

“While we already have an efficient and productive agricultural system, there is no room for complacency – we must and can continue to make improvements in terms of sustainability and environmental performance on all our farms,” he said.

People pointed to rising emissions, such as a 2.9 per cent rise in 2017, but that did not take into account a flat-lining of emissions for many years, “and we are in a post dairying milk quota era”.

He added: “Finger pointing isn’t really beneficial to anybody. We recognise we have an issue. We are up for the challenges that are there.”

While Irish agricultural production was recognised by independent analysis as having one of the lowest carbon-footprints internationally, it would have to become more efficient in carbon abatement, he said.

This would be done through new technology; investing in improving the genetic merit of the beef herd – with a similar approach in dairying. It would involve improving soil health and fertility – and embracing better livestock systems.

With the possibility of emissions increasing further, this would be addressed by a range of measures such as investing €100 million a year in afforestation and in using farm wastes more efficiently through anaerobic digestion and biomass production.

He added: “We sometimes feel that the sector gets a little bit of a harsh doing. We really know that we must do more.”

A transition would happen, he said, but it needed to be as just as possible. “But would we prefer to dismantle an industry that is as carbon efficient as it is; to have it displaced on the supermarket shelves by products that have a heavy carbon footprint. I think they are issues that we don’t think about in the context of what is a global challenge.”

Pat Kenny ‘taken aback’ by scale of nursing home planned for site next to his home 16:54
Coronavirus: Northern Ireland reports 16 further deaths 16:46
Target to have all adults vaccinated by September ‘contingent on deliveries’ 16:38
Independent inquiry to examine mother and baby homes in North 16:56
Remote hearings of High Court personal injuries cases to resume 16:13