We need to talk about those who drive big cars, have two homes and fly business class 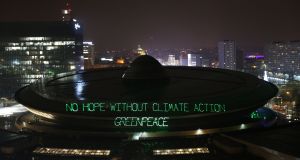 It’s time to have a difficult conversation about the lifestyle of wealthy people – those who drive big cars, frequently fly business class and have two homes, warned climate scientist Prof Kevin Anderson.

He said the richest 10 per cent, invariably living in “self-proclaimed climate progressive countries”, are responsible for half of the total lifestyle consumption carbon emissions in the world, while the poorest half contribute a mere 10 per cent.

Reducing the carbon emissions of wealthy people to the European average would go a long way to resolving the world’s carbon emissions crisis, he told a “Scientists’ Warning” press conference at the UN climate summit.

A person living without use of fossil fuels, just breathing, eating, and excreting, produces about a ton of carbon a year, he noted. Yet most of us, especially those living in western Europe, create 20 tons. “We can do better at reducing our carbon footprints,” added the deputy director of the Tyndall Centre for Climate Change Research in Manchester.

Progress on reducing the carbon footprint of the wealthy, he believed, was being hindered by the “Davos mentality”, which is marked by ongoing growth with high levels of inequality and a “because we’re worth it” mindset –“a given we daren’t question” .

Related to this, was the “climate glitterati” who loved to rub shoulders with the Davos set and believed the climate crisis would be solved by some technology in the future. Consuming less was the easy win but not accepted.

Two gambles were at play here: “that the technology will work” and that it would operate at a planetary scale.

Engineering could do a lot, and the variety of plant crops could be changed to be more reflective of sunlight. Vaporising sea water to create more clouds so that more places around the world have weather like Scotland might be a geoengineering step in the right direction to reverse regional rising temperatures.

Carbon taxes, while returning benefits to citizens, might work, he said, but he feared the wealthy would just continue to pay the bill, “happy for the poor to be constrained”.

An individual’s emissions were not as important as how their actions catalyse change throughout their family, church, and sports clubs.

“Young people have a huge impact because they are already networked with many people. The younger generation can influence older generations on how to behave, as well: no excuses, reduce your carbon footprint or jeopardise all of our futures.”

There was optimism among the young because they do not burn fossil fuels to attend meetings. Instead, they are on social media: “Rapid fire communications. Messages fly about without the carbon cost.”

He said he himself applies a “no fly” principle for attending conferences, the COP24 included.

In fully adopting the Paris Agreement on climate change, he believed there was a need for “a global carbon ration” divided out between countries. And the extent of temperature rise mattered. Unfortunately, for some areas, such as Bangladesh, the difference between 1.5 degrees and 2 degrees “is significant in the amount of suffering, while in Europe not so much”.

“There is a 5 per cent chance we’ll succeed. This is a choice. If we choose to act responsibly the chances of success go up. Unfortunately, many, maybe most, politicians are going retrograde,” he added.

On air travel, he said: “I think flying is emblematic of a very high carbon lifestyle.” And he included academics among the world’s frequent fliers.

He concluded by quoting the American futurist Alex Steffen: “The curve we’ve been forced onto bends so steeply that the pace of victory is part of victory itself. Winning slowly is basically the same thing as losing outright. We cannot afford to pursue past strategies, aimed at limited gains towards distant goals.

“In the face of both triumphant denialism and predatory delay, trying to achieve climate action by doing the same things, the same old ways, means defeat. It guarantees defeat.”

The global rich most definitely display such denialism, according to the Anderson carbon footprint notebook, and most of them “know they are in the top 10 per cent”.