Largest meteor shower of the year to cross Irish skies 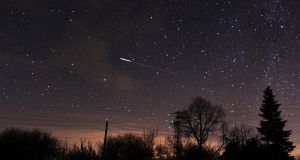 The Gemenids, the meteor shower which will cross Ireland this week, over Bulgaria in 2015. Photograph: NurPhoto/Getty Images

The biggest meteor shower of the year will be crossing over Irish skies between tonight and Friday night.

The shower, known as “The Geminids”, is a meteorological event that happens around December 13th each year when the Earth’s orbit comes in contact with the debris trail of a “rock comet” called 3200 Phaethon.

Met Éireann is forecasting wet and cloudy conditions across most of the country for the three nights of the meteor shower, with Thursday night being particularly cloudy.

Liz Gavin, a forecaster at Met Éireann, said: “Unforunately, tomorrow will be a rather cloudy day... The frontal system will hang around overnight but there might be some clear breaks. The best of the breaks may be in the northeast of the country.”

David Moore, the editor of Astronomy Ireland magazine, said that despite the poor forecast for tomorrow night, people should “watch tonight and Friday night” as there will still be “10 times more [shooting stars] than normal” either side of the “night of maximum”.

“The shower is quite long lived. It takes a couple of weeks [for Earth]to go completely through it,” said Mr Moore.

Astronomy Ireland is asking the public to keep an eye out for shooting stars, especially in clearer parts, and to send their counts to the organisation via its website to “allow us to forecast when the best ones [meteor showers] occur”, Mr Moore said.