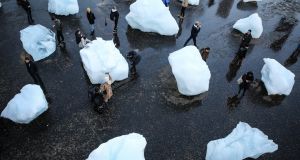 Negotiations at the UN summit in Poland, now entering their final political phase, continue to be dominated by issues around the strictness of a rulebook to bring the landmark Paris agreement on climate change to life.

In addition, there are lingering issues about the standing of the UN Intergovernmental Panel on Climate Change (IPCC) report published in October, which warned the world was off course in trying to contain global temperature rise to within 1.5 degrees.

The US and other big oil and gas producing countries refused to welcome its findings in a heated COP24 plenary meeting at the weekend, “but this is just a warm-up”, according to a seasoned climate summit negotiator. “It is a political matter for this week.”

“The fact that a group of four countries were trying to diminish the value and importance of a scientific report they themselves, with all other countries, requested three years ago in Paris is pretty remarkable,” said Alden Meyer of the Union of Concerned Scientists.

US State Department negotiators, however, remain deeply engaged in talks on the future of the Paris deal, a source directly involved in the negotiations told The Irish Times. “I cannot say they are being obstructive,” he added.

Others indicated there is a US push for a deal on climate rules that president Donald Trump or his successor would be able to swallow.

More tangible progress has been made under the “Talanoa Dialogue”; a process designed to help countries implement and enhance their “nationally determined contributions” by 2020. It is expected to conclude and feature prominently in a final declaration at the weekend.

The dialogue, initiated last year, seeks to break the climate deadlock by drawing participants closer together through sharing their stories of climate change. Governments, civil society, NGOs, businesses, cities and others were invited to submit stories responding to three questions: “Where are we now? How do we want to go? How do we get there?”

It is expected that it will be presented to the UN General Assembly, because of its significance in light of the UN sustainable development goals, according to a lead negotiator.

“Loss and damage” arising from climate change was the outstanding issue being highlighted by least developed states and small island countries – specifically how to provide financial support to countries whose economies are too vulnerable to cope with the impact of climate change. A particular difficulty is compensating for the losses and damages that already occur and are irreversible.

The task facing the COP24 was underlined by a report issued on Tuesday which showed average world temperatures are on course to far exceed the main goal set in the 2015 Paris Agreement on limiting global warming.

The overshoot by the end of this century, however, could be less severe than expected thanks to significant efforts by some countries to combat climate change, according to Climate Action Tracker (CAT) – a consortium of three independent European research groups.

The CAT report highlighted progress since 2015, but current policies meant the world was heading for warming of 3.3 degrees, compared with 3.4 degrees it predicted a year ago. If governments were to implement policies they had in the pipeline, warming by 2100 could be limited to three degrees.

“We have yet to see this translate into action in terms of what governments are prepared to put on the table,” said Bill Hare, chief executive of Climate Analytics, one of the three CAT research groups.

Since the Paris accord, countries including Argentina, Canada, Chile and India, plus the EU are moving in the right direction towards cutting emissions. Countries such as Norway and Costa Rica are making progress with low-carbon transport and renewable energy deployment but China’s carbon emissions rose again this year, the report states.

“With prices for renewables dropping roughly a third since Paris, both South Africa and Chile are mapping out strategies to address coal, and renewables are taking off in India,” said Niklas Höhne of NewClimate Institute. But the US, Australia, Brazil, Indonesia, Russia and the United Arab Emirates have made either no progress or taken backward steps.