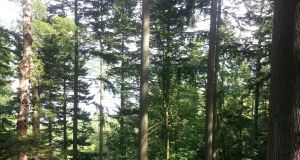 People have strong views about the natural environment even if as individuals many of us have little input into how it is maintained or managed. And forestry is one aspect of the Irish landscape which is hotly debated.

You only have to remember the furore about the proposal to sell off our State forestry during the recent economic recession to realise the strength of emotion this subject arouses.

The burgeoning interest in continuous cover forestry as an alternative to planting and clear felling trees is part of a wider societal interest in sustainable forest management.

And the Irish semi-State company Coillte has acknowledged that the public dislike of the denuded landscape left after a forest has been clear felled is one factor which has influenced its adoption of close-to-nature or continuous cover forestry principles in recent years.

“There are research sites in private forests in France which have made the case that this silvaculture approach is a good alternative – both from an economic and environmental – to planting and clear felling,” says Padraig O’Tuama, a Coillte forester with expertise in continuous cover forestry.

This form of sustainable forest management is also attracting Irish farmers keen to get income from land not suitable for growing crops or feeding farm animals.

“There is about 4,000 hectares of forest managed by the continuous cover forestry principles in the private sector. These are people who are more aware of the environment, who want a steady income stream from their woods, and who don’t want to clear fell their own forests. Some of them have also experienced the continuous cover forestry principles while living abroad,” explains Paddy Purser, forester and chairman of ProSilva Ireland.

ProSilva Ireland is a network of forest owners, foresters, ecologists and other who promote continuous cover forestry on the island of Ireland. It is part of ProSilva Europe, a network of 25 countries across Europe.

While still in its infancy in Ireland, this approach is standard practice in many parts of Germany, Slovenia, Denmark, Norway and to a lesser extent in France, Belgium and Austria. In fact, the clear felling of forests is illegal in Denmark, Switzerland, Slovenia and parts of Germany.

At a recent ProSilva open day on a farm in Co Carlow, foresters explained how the continuous cover forestry approach allows economic, landscape, amenity and biodiversity needs of the forest to co-exist in the one place.

Up to 50 people walked through farmer Peter Rose’s forests of Sitka and Norway spruce, Douglas fir, larch, Scot’s pine, and hardwoods of ash, sycamore and oak, while foresters explained the approach to thinning and active encouragement of natural regeneration of trees.

It was interesting to see how trees were selected for felling. “Individual trees are selected for felling on the basis of their quality and whether or not they are ready for market. This creates an irregular forest structure over time which facilitates natural regeneration of diverse species and more resilient and adaptable forests with regard to climate change and threats from insects and diseases,” explains Purser.

It’s not an exact science but the idea is to encourage further growth of the healthiest trees while also promoting an under-storey of vegetation so that trees naturally replant themselves over time and promote a stable ground structure for the entire forest.

The ultimate aim is to have trees of different ages, continually growing and frequently thinned to provide income from timber while allowing other trees to mature in a less crowded forest.

This also results in a more visually attractive and ecologically diverse landscape than a forest where rows of trees are systematically removed in the thinning process.

Peter Rose now has about 50 per cent of his farm under forestry, planted over a 25-year period and now following continuous cover forestry principles. “I’m happy with forestry as a good source of income,” he says.

ProSilva Ireland is launching a new practical guide to close-to-nature forest management for Irish forest owners and foresters at the Irish Forestry, Woodland and Bioenergy Show in Stradbally, Co Laois, this weekend (May 5th/6th).

Foresters are also keen to point out that continuous cover forestry principles allow forests to interact better with protected natural habitats such as the freshwater pearl mussel which is present on Rose’s farm.

When a forest is planned for clear felling, a buffer zone without trees must be created so that water courses aren’t damaged by excess nutrients, rainwater and sediment coming from the clear felling.

However, ProSilva member and independent ecologist Faith Wilson argues that the less intensive nature of continuous cover forestry can actually protect rather than damage water courses.

“There is potential for continuous cover forestry to protect soil and water quality as well as provide visual amenity and better biodiversity – all of which are societal benefits,” she says.

In an ideal world continuous cover forestry might seem like the best way forward but forestry experts acknowledge that there is a legacy of planting and clear felling that is still very strong in this country.

“The whole industry is set up for the 40-year rotation of trees like Sitka spruce right down to the capacity of saw mills to take certain timber sizes,” says Wilson.

Many conifer plantations in Ireland are also on deep peat sites where virtually no thinning has occurred. The risk of trees falling in storms in such plantations creates instability in a forest, making it unsuitable for a continuous cover forestry approach.

“We have a legacy of planting forests in the wrong place in Ireland whereas in countries like Switzerland the forests themselves protect villages from avalanches while still producing timber in a sustainable way. The ProSilva approach is still relatively new in Ireland. We’ve a way to go to have our forests as a resource that can be managed sustainably,” says Wilson.