Change of plans: Cars will not be banned from Dublin quay 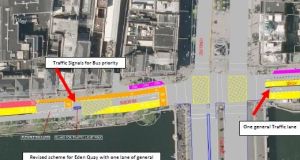 Dublin City Council has moved away from plans to ban private cars from Eden Quay, following opposition to the proposal from councillors and business lobby groups.

A range of measures aimed at restricting cars travelling through Dublin city centre are set to be introduced.

Under the original plans, Eden Quay was to be restricted to public transport, including taxis.

However, it is now proposed to allow one lane of general traffic from Bachelor’s Walk to Eden Quay and on towards Dublin Port.

Dublin City Council is still planning to go ahead with other measures, such as extending bus lanes on the north and south quays.

Private cars are also to be prevented from turning right onto O’Connell Bridge.

After holding non-statutory briefing sessions on the project, Dublin City Council received 205 submissions from members of the public.

Issues raised by both the public and stakeholders had to do with: Eden Quay; additional bus lanes on the quays; the EIS report; the prematurity of the plans; the cycle infrastructure and the economic impact the plans would have.

Meanwhile, the Dublin For All group, which represents a number of businesses in the city centre, including the owners of the 3Arena, said they were disappointed the council had not agreed to an environmental impact assessment (EIA) on the proposals.

“Our independent consultants disagree with the city council’s position regarding an EIA, so we will now consider a judicial review on the matter,” he said.

Independent Cllr Mannix Flynn said the proposals to ban private cars from parts of the city or to pedestrianise areas should have been brought before An Bord Pleanála.

“They’re trying to be put a ban on cars turning left on O’Connell Street. It’s dangerous for pedestrians and drivers.

“The idea of sending a vast amount of cars up around Blackhall Place and Brunswick Street beggars belief.

“It would make much more sense to send cyclists up there and let cars go down the quays.

“The idea of taking footpaths away from the quays is ludicrous, as people would have to use the boardwalk.

“The boardwalk is closed several times throughout the year for flooding or frost. It’s also awash with anti-social behaviour, so it’s not a runner,” he said.