Michael Viney: As hedges and trees have grown, the acre is amassing quite a fernery

Apart from its rarity and ethereal beauty, the botanical fascination of the fern includes a quirk of lifestyle largely peculiar to Ireland 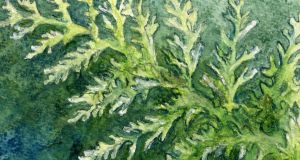 In the great surge of growth that has overtaken the garden, the leaders are old, wild familiars: briars arching from the dark heart of shrubs, nettles regrouping in the shades.

But the plants installed on purpose have their own, invasive strategies. Cranesbill geraniums have enveloped most of their neighbours, some quite posh and costly, in a lava-flow of rhizomes. Lady’s mantle, a seed scatterer, raises its pleated, mist-jewelled leaves from every crevice in the paths.

Ferns, both wild and “garden”, relish the showers of the new Atlantic rain and the extra humidity from the Continent. With both aerial spores and rooting networks, they go on annexing more metres of land.

As hedges and trees have grown, the acre is amassing quite a fernery. I have added and encouraged some of it myself, like the soft shield fern that laps at the bathroom window and marches out into the sun. Brilliantly fresh in its spring unfurling and now a golden-green thicket of knee-deep, feathery shuttlecocks, it can go on invading as far as it likes.

At the garden’s shady margins stand advance guards of Dryopteris, the tall fern family of western woods and boreens. I welcome their green and graceful fountains, brave and tender. But among them, and not at all welcome, the first bracken is also edging in, on underground cables, from fields around.

A visiting botanist once urged us to try tree ferns in the hollow of the stream and New Zealand recently came close to picking a tree fern for its national flag: I loved that creative idea and wanted it for Ireland. Despite the downside of bracken, the island is a treasure house of fernery, much of it beautiful and rare and shared in abundance only on distant Atlantic islands such as the Axores.

For botanists, the star is a plant so threatened that most of its locations are still secret, well over a century since the Victorian craze for fern-collecting (“pteridomania”) came near to hastening its extinction.

The Killarney fern, Trichomanes speciosum, is a filmy fern of finely cut, translucent tracery. Its bright-green fronds, hand-size and more, can take months to unfurl and last for years. They arch from the surface of rocks in deeply shaded mountain gullies where spray from waterfalls drips from their tips and humidity tops 90 per cent.

Such special needs challenged Victorian collectors growing ferns in sealed bottle gardens and cases like miniature greenhouses on legs. These were proof against the coal smoke and gaslight fumes of London and invented by a Whitechapel surgeon, Nathaniel Bagshaw Ward.

However, the prize plants they grew often included some peeled from the Kerry hills, a particular stronghold of rarities. Hearing of the collectors’ passion, locals climbed up to pick bagfuls of roots from places such as the Torc waterfall and hawked them in wheelbarrows to tourists in Killarney’s hotels.

Apart from its rarity and ethereal beauty, the botanical fascination of the fern includes a quirk of lifestyle largely peculiar to Ireland.

Ferns are unique among land plants in having two independent life stages: the gametophyte generation, small, mossy and short-lived; and a sporophyte generation that grows the long-lived fronds. The Killarney fern is unique among European ferns in that both generations are living and reproducing in widely separate colonies.

The Irish frond colonies were first discovered in 1804, at the Powerscourt waterfall in Co Wicklow, but the first gametophytes were not recorded in the wild until 1992. Both may occur together in the same dark and humid habitats, but the frond-only colonies are fewer and concentrated in the south.

Gametophytes also like dark, damp crevices and caves (botanists find a headtorch useful), but will grow its velvety mats in drier places and perhaps 100km from the nearest clump of fronds.

The largely separate distributions of the two kinds of colony are attributed, at least in part, to the obsessive collection of fronded plants in the late 19th century. And enough of the same threat remains, it seems, to keep a veil of secrecy over their exact locations.

Of 177 known colonies, 153 are in special areas of conservation (SACs) and most of the rest are of gametophytes only. Monitoring of their habitats by botanists from the Irish Parks and Wildlife Service and Trinity College Dublin has been intense, even to keeping a count of fronds in the larger colonies (Irish Wildlife Manual No 82 at npws.ie)

Some Killarney fern sites need a mountaineer’s ropes to reach, and a new quartet of fronded colonies was discovered only in 2012 in west Co Cork – this by intrepid Irish botanists who call themselves “the rough crew”. For a lively narrative and photographs of their finds, browse the 2018 conference proceedings of the British and Irish Botanical Society (bsbi.org/irish-conference) and bring up the report by the team’s leader, ecologist Rory Hodd.

For the living fern, try the National Botanic Gardens in Glasnevin, which has been growing it for 150 years, or the tropical ravine of the botanic gardens in Belfast.