Built in 2017, the world's first floating wind farm off the coast of Peterhead in Scotland, was an innovative technology in renewable energy. Video: Equinor 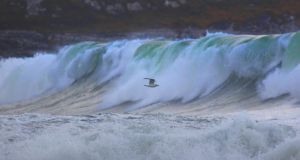 A sea bird amongst the Atlantic waves in Kerry. The Irish Atlantic coastline has some of the most energetic waves in Europe. Photograph: Nick Bradshaw

When Storm Ophelia was setting new wind-speed and wave-height records last autumn, ocean energy researchers were once again reminded of the challenges posed by extreme weather.

The Irish Atlantic coastline has some of the most energetic waves in Europe, but harnessing that power to turn it into electricity is still absorbing some of the finest marine engineering brains.

In Scotland, meanwhile, there was a sense of euphoria when five floating turbines anchored off Peterhead survived not only Ophelia’s recorded 125km-an-hour speeds, but also the gusts of more than 160km-an-hour during Storm Caroline in early December.

The 30 MW Hywind project, developed by Norwegian energy firm Statoil (now Equinor) and Masdar, is the world’s first floating windfarm. In its first three months, it generated 65 per cent of its “maximum theoretical capacity”, compared to 45-60 per cent for a bottom-fixed offshore wind farm in winter.

The floating turbine invention was an idea on the back of a napkin, devised after a chat by two Norwegian engineers, Dag Christensen and Knut Solberg, when becalmed during a sailing regatta 16 years ago.

We have an excellent resource, and quite a lot of water which is deeper than 60m and shallower than 150m

The attraction of floating turbines is that they can work in deeper and windier waters, and may attract fewer objections – although they require extensive mooring systems which can restrict navigation and close off fishing grounds.

Ireland currently has one fixed offshore wind farm, the SSSE Renewables Arklow Bank, and three others are in development off the east coast. In 2014, it was estimated that Ireland could produce 4.5GW offshore by 2030 “without significant impact” on the environment – enough power for 4.5 million homes annually.

However, Ireland’s continental shelf is an ideal location for floating turbines, which give much higher returns than fixed counterparts, according to Sustainable Energy Authority of Ireland (SEAI) project manager for ocean energy Patricia Comiskey.

“We have an excellent resource, and quite a lot of water which is deeper than 60m and shallower than 150m,” Comiskey says. “Our grid accessibility right out to the coast is quite strong compared to western Scotland and France. ”

Equinor is one of a number of companies interested, but no one has yet gone further, she says. Last year, the State’s full-scale ocean energy test site at Annagh Head, near Belmullet, Co Mayo, began to investigate technologies such as floating wind turbines.

The Atlantic Marine Energy Test Site, to give it its proper name, is part of Irish research which extends from laboratories at the Lir National Ocean Test Facility at University College Cork’s Beaufort Building in Ringaskiddy to a quarter-scale testing site in Galway Bay, managed by the Marine Institute with the Sustainable Energy Authority of Ireland (SEAI). A new foreshore lease for the location is currently the subject of a judicial review.

The ESB is also continuing work on its Westwave project, based at Killard off the Co Clare coast, which aims to develop generation of 5 MW of ocean energy, backed by European Union grants.

SEAI views offshore wind as the current “most immediate” contributor to meeting Ireland’s 2030 renewable energy targets, though still sets store on wave and tidal development – once challenges such as moorings and anchorage can be overcome, Comiskey says.

Since 2009, it has invested €14 million in nearly 100 prototypes. Inevitably, there have been casualties: “Ireland, Scotland and even Australia have all experienced failures,” Comiskey says.

However, there have been successes, too – Irish marine developer Ocean Energy has teamed up with the US Navy and US company Vigor to deploy a full-scale wave energy generator at the navy’s test site in Hawaii.

Saying that SEAI has supported this “landmark” project, Peter Coyle of the Marine Renewables Industry Association notes the generator is so big that it dwarfs one of the Marine Institute’s research vessels, Celtic Voyager.

“What we have done is to focus on working with our partners on moving through ladders – known as technology readiness levels – to identify problems at an earlier stage,” Comiskey explains.

The Irish side is also working with bodies like Scottish Enterprise, Invest Northern Ireland, and Belgian and Dutch partners to investigate the common challenges facing small and medium firms trying to make their way in ocean energy.

Recently, Minister for Environment and Climate Action Denis Naughten told an Ocean Wealth Summit in Galway that the Government will soon clear the way for him to back offshore developers.

Firstly, Naughten will have to get so-called State aid approval from the European Union for an offshore Renewable Electricity Support Scheme, similar to the one run on land. He hoped, he said, to have approval by the second half of the year.

Under an EU agreement, member states have committed to producing 32 per cent of all energy needs from renewables, but the targets will go higher. Ocean energy will have to play a role if those numbers are to be met.

“If you look at the technical challenges we have between now and 2020 to have 40 per cent renewables on our electricity grid, you can see the challenge we are going to have to increase that to 55 per cent by 2030. But we are determined to do that.”

Developing clear planning rules under the Maritime Area and Foreshore (Amendment) Bill has been “slower than envisaged”, he acknowledged, but he was committed with Cabinet colleagues to ensure that legislation “becomes a reality as soon as possible”.

Reviewing Ireland’s performance today, Peter Coyle is far more optimistic about the future of ocean energy than he was five years ago, believing the Government recognises the gains to be made if Ireland becomes a world leader.

Scotland, our nearest competitor, is still an important player but is “hamstrung” by a combination of Brexit, which will cut it off from EU funding, and British energy policy which now does not support renewable marine experimental technologies, he notes.