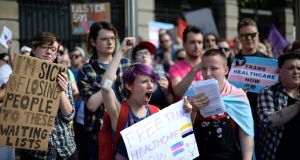 Ollie Bell (centre) joined other groups supporting The Is Me, Transgender Healthcare, a protest at Government Buildings and Leinster House about access to healthcare for transgender people. Photograph: Dara Mac Dónaill/The Irish Times

About 300 people protested in Dublin on Saturday to call for proper healthcare within the State for members of the transgender and non-binary community.

The group marched from the Department of the Taoiseach on Merrion Street to Leinster House in a call for support from politicians, including Taoiseach Leo Varadkar and Minister for Health Simon Harris, to provide “adequate, safe and best-practice” healthcare here.

A number of those present spoke of how they had travelled abroad for treatment, including surgeries, which they cannot have in Ireland.

Many had experienced years of waiting on lists for referrals to endocrinologists so that they may have the hormone treatment they need, but which GPs will not prescribe.

The grassroots ‘This Is Me – Transgender Healthcare Campaign’ began last December, with its first protest in January, and has attracted increasing numbers of supporters in recent months.

Noah Halpin, who led the march with co-organiser Luke Daly, said it started “out of anger” at how transgender people were being treated within the health system.

“We thought maybe 10 or 15 of our friends would turn up and shout at the gates of Leinster House, but we got almost 400 people turn up that day – it was very passionate.”

“From there, we decided it can’t just be a protest, it has to be a campaign. We can’t stop now, so we continued and set up meetings with TDs, senators, ministers and some HSE officials, all of whom have been fantastic and very supportive.”

The group has succeeded in having the issues raised in the Dáil and Seanad, through parliamentary questions, orders of business and commencement matters.

“We think this has given a huge push to the Department of Health and the HSE. The main issues facing trans people and the HSE would be the model of care that’s currently in place.

“We currently have a psychiatric model of care. This is outdated, this is damaging and it’s no longer practised in most developed nations in the world, especially in the western world,” Mr Halpin said.

“What is best practice is called WPATH, which stands for the World Professional Association for Transgender Healthcare.”

“This model is one of informed consent and it is the model that the majority of the developed world uses. Here in Ireland the HSE and the Department of Health have continuously stated on public record to us that they do practice WPATH. However, we have continuously told them that in practice it isn’t happening.”

He said there was a waiting list of about two years to access hormone replacement therapy, which was “usually the first port of call for most people”.

Mr Halpin said that once people came to the top of the list they would see a psychiatrist.

“There are only two endocrinologists who will prescribe HRT – and bear in mind there are about 50,000 gender-variant people in the country, about 1-2 per cent of the population.”

There are just two endocrinologists seeing trans patients, one at Loughlinstown Hospital and another at Galway University Hospital.

He noted the World Health Organisation had recently declassified transgender identities as mental health or behavioural disorders, which he said meant they could not be treated as such.

“In Ireland, we haven’t recognised that and they continue to treat trans people under the psychiatric model of care.”

“Once you do get a referral for surgery the waiting list is years and years. In terms of bottom surgery, which is like genital reaffirmation, there are no surgeons in Ireland – it has to be done abroad.”

Mr Halpin said that by introducing the WPATH standards, it would lower the public cost of care because people would then be able to seek treatment from their GPs.It would also eliminate waiting lists.

The group says Minister for Health Simon Harris has said he would meet with the This Is Me Campaign, “over a number of months and through a number of channels”.

“However, this meeting has not yet come to fruition.”

Noah Halpin (27), a transgender man from Dublin, finally had a psychiatrist’s appointment in Dublin last week.

“From the very start of my journey to that appointment, I waited three years. From when I walked in the door of his office to when I walked out it took three hours of talking,” he says.

“It was really invasive, it was really intrusive and it was utterly exhausting. From there, you are either recommended or not recommended for HRT to the endocrinologist. They refused to give me any date. We are waiting for permission to transition.”

Max Ó Fhloinn (19) a transgender man from Leitrim, and Victoria van der Spek (20), a transgender woman from Cavan, are a couple who have been together for two years.

Both have changed their names legally under the gender-recognition legislation here. Victoria says she is in a “privileged” position and has been able to travel to the UK for treatment, but will also seek surgery in the future. Max has considered travelling to Poland for “top” surgery.

“Mentally it’s very draining – everything takes so long,” Victoria says. “I’m extremely privileged in the position I’m in because my Dad is a doctor. That’s been quite useful to me, specifically. He was able to explore other options for me.

“Even still, it was months at a time really. I know that’s an issue all over the health system, but if you’re going public here it can take over a year.”

Max says the minimum wait to see the endocrinologist in Loughlinstown Hospital is about 18 months.

He has looked at the possibility of paying for a private appointment to see the endocrinologist in Galway for about €200-€300.

“There’s all these barriers you need to get through proving who you are before you can (get there).”

“There is a surgeon over in Poland and I know a few friends who have gone abroad because the waiting list isn’t that long and they have more developed techniques than in Ireland.

“They don’t really have a specified top surgery here for trans-masculine people here – it’s just a double mastectomy that cancer patients would get and the results aren’t as nice or as aesthetically pleasing.”

Cameron Keighron (24), a transgender man from Sligo, who is doing a Masters in regenerative medicine in Galway, had “top” surgery in Poland last January.

“From when I came out (in university in 2012), I really wanted to start the process of taking hormones and matching my physical appearance to how I felt inside.”

He says it took nearly a year and a half to get two separate letters from two psychologists to see an endocrinologist in Galway.

“Everything that you’ve ever gone through in your entire life is questioned. They try to find a reason why you’re trans or not to give you hormones. And if you give them an answer to something as simple as whether you played with Barbies or Action Men, and you identify as a trans man and you say ‘Barbies’, you run the risk of not getting your letter.”

After he had started HRT, he wanted to begin the process of preparing for top surgery.

“There’s only one surgeon in Ireland that can do it and it’s up to a three year waiting list publicly, or you’re paying about €8,000-€9,000. It just isn’t feasible for college students or full-time workers or pretty much anyone who doesn’t have this level of disposable income.”

Cameron had been “binding” his chest for two years but had a number of medical conditions that made this difficult.

“I knew I was going to have to source this healthcare somewhere else, or I was running the risk of creating long-term health risks to myself. A lot of trans people, trans men specifically, who bind, end up getting pleurisy, they break ribs and they make themselves ineligible for top surgery, because as you bind you are changing the shape of your chest and you are changing the muscles.”

He made contact with a surgeon in Poland and made the trip with his parents and best friend in January and the entire cost, including accommodation, was about €3,500.

“It took about two hours and the first thing I did when I woke up was to instantly touch my chest and it was such a relief and my body finally felt like it was mine. When I looked down, I knew this was what it was supposed to look like.”

“I wish I could have had it done it in my own country.”