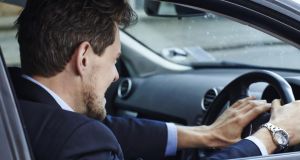 “More motorists are experiencing incidents of bad behaviour on the part of other drivers.” Photograph: iStock

A majority of Irish drivers are reporting higher volumes of bad behaviour, including road rage, according to a new survey, which links the increase to Ireland’s economic recovery.

The poll also found that a significant number of motorists believe the Government needs to do more to clamp down on bad drivers.

“In recent years we have seen traffic levels return to Celtic Tiger levels, and one unfortunate consequence of that does appear to have been that more motorists are experiencing incidents of bad behaviour on the part of other drivers,” said the AA’s Conor Faughnan.

He said higher traffic volumes and increased road rage incidents tended to go hand in hand, but stressed there was “certainly no excuse for poor behaviour on our roads”.

He said that in order to make roads safer it was “important that we remain patient even when stuck in significant traffic jams and respect the rights of all road users, from other motorists to vulnerable road users such as cyclists or pedestrians”.

“We’ve made a lot of progress in tackling roads deaths and serious incidents in the last decade, but there is still a lot of work to be done. It’s important that Government don’t become satisfied with the improvements and turn their attention away from this area,” Mr Faughnan said.

He said a priority for Government should be “to reverse the cuts to the Garda Traffic Corps and to ensure its continued growth over the next few years to ensure we don’t slide backwards in terms of road safety”.

He said cuts to the Traffic Corps in recent years had “greatly impacted on Garda ability to police our roads effectively and this needs to be rectified”.