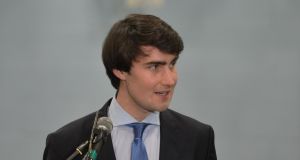 Fianna Fáil has welcomed publication by Fine Gael of a Bill to give legal force to carbon emission reductions in government departments and sectors, including transport and agriculture.

However, the party has declined to indicate if it will support its quick passage before an election.

Fianna Fáil spokesman on climate action and environment Jack Chambers accused Fine Gael of attempting to “own a key climate response” that was called for by all parties almost a year ago.

“It is extremely rich for Fine Gael to be calling for this legislation to be prioritised in the new Dáil term when this was an all-party priority recommendation made back in 2019 and when Fine Gael themselves have failed to undertake the necessary measures,” he said.

He called on Minister for Climate Action Richard Bruton to provide the full text of the Climate Change (Amendment) Bill “and ensure it fully matches recommendations from the landmark report” of the Joint Oireachtas Committee on Climate Action.

“It is welcome that the Oireachtas may finally have the opportunity to examine and progress this much needed legislation. But it is extremely disappointing that this is being described as a Fine Gael initiative,” he added.

“Back in March the Joint Oireachtas Committee on Climate Action produced detailed recommendations to drastically improve climate governance and introduce a new ‘net zero’ target. It also called for Government to enact necessary amending legislation by year end. Yet Fine Gael subsequently dismissed this timeline and we are now still waiting for clarity on a new long-term target.”

“No one party should be seeking to own a key climate response that was called for by all parties almost a year ago. All parts of society have a role to play and must be supported, particularly already vulnerable communities and households. Belated announcements and press releases before an election are a far cry from the type of real and inclusive climate action the public have been demanding for years.”

On the possibility of the Taoiseach and Fianna Fáil leader possibly agreeing on its passage before an election, Mr Chambers said for the Bill to be urgently progressed, the Oireachtas had to have the opportunity to properly scrutinise it and that it respects the committee’s recommendations.

Mr Bruton said on Monday he wished the Bill would be subject to pre-legislative scrutiny by the committee.

It was particularly important that the necessary targets were enshrined in legislation, Mr Chambers said, as it was a key shortcoming in the existing Act, which Fianna Fáil sought to resolve more than two years ago through a dedicated bill.

The proposed legislation had to respect Paris Agreement obligations with full oversight from the Oireachtas, together with an advisory council with a proper range of expertise, he said.

Any separate target for methane emissions in agriculture should not treated as a silver bullet – “this must be matched by the immediate delivery of Teagasc’s mitigation roadmap, as well as new supports and programmes to allow farmers to reduce emissions in a sustained and equitable manner.”

On the future ban on the sale of fossil fuel cars, a 2030 commitment on its own was insufficient, Mr Chambers said. “Most families and businesses will remain reliant on these vehicles for the foreseeable future and any ban must be combined with greater investment in EV charging, public transport and cycling infrastructure.”