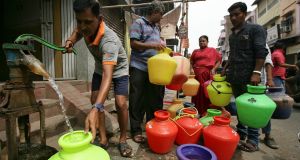 A man uses a hand pump to fill up a container with drinking water as others wait in a queue on a street in Chennai, India. Photograph: P Ravikumar/Reuters

More than 600 million people dependent on agriculture have been adversely affected by drought conditions across swathes of India.

Soaring temperatures since early June, averaging about 45 degrees, have stifled most of the country, while the progress of the annual monsoon rains, which normally bring relief from the searing heat and are a vital source of water, has been the slowest in 12 years.

An estimated 43 per cent of the country is affected by drought.

According to countrywide news reports, hundreds of villages and small towns in states including Uttar Pradesh in the east, Rajasthan and Maharashtra in the west and Andhra Pradesh in southern India are surrounded by parched farmland and have been deserted.

The country’s meteorological department predicts a deficient monsoon that in all likelihood may not be able to resuscitate some 91 life-sustaining reservoirs across India, where water levels in some cases are hovering at about 30 per cent capacity.

The federal government, however, has played down reports of water shortages. Addressing a press conference in New Delhi on Monday, water resources minister Gajendra Singh Shekhawat said media reports of the water crisis were exaggerated.

He said there was adequate water in dams and reservoirs in the northern Himalayan state of Himachal Pradesh and the crisis was “not as bad as created by the media”.

But the reality is starkly at variance with the minister’s assessment and palpably evident everywhere else. Cities have seen queues of people with plastic drums, buckets, kitchen utensils and empty bottles at municipal water distribution points.

A recent report by the National Institute for Transforming India, or NITI Aayog, headed by prime minister Narendra Modi, said that 21 cities, including Delhi, Bangalore and Chennai, are expected to run out of groundwater by 2020.

“Critical groundwater resources that account for 40 per cent of India’s water supply are being depleted at unsustainable rates,” the NITI Aayog analysis warned.

The NITI Aayog report also forecast that by 2030 India’s water requirements would double and the resultant water scarcity could trim 6 per cent off its annual gross domestic product. It would also seriously affect food security.

The southern city of Chennai – formerly Madras – is at present the worst afflicted by the water crisis. The port city, which is India’s sixth largest, with a population of about 5 million, requires 800 million litres of water daily, but is able to provide only 525 million – and that too is reducing rapidly.

Many of its private offices have asked their employees to work from home until they figure out ways to mitigate the water scarcity, whilst numerous small hotels and restaurants have temporarily shut down.

“Chennai is now in panic mode,” city resident Syed Altaf told the NDTV news channel on Tuesday. It took at least four days to get access to a water tanker now, whereas earlier it had taken just a few hours, he added.

Farming activist Devinder Sharma said decades of unplanned exploitation of groundwater resources and poor monsoon rains in consecutive years had turned vast portions of central and western India into an arid dust bowl. He predicted that the agriculturally rich northern Punjab state too would become a “desert region” within two decades, if exploitation of underground water resources continued at the prevailing rate.