Climate plan: 1m electric cars by 2030 does not look realistic

Analysis: A decade ago Government set a 10% goal for electric cars and missed target spectacularly 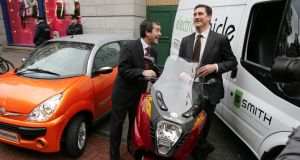 A decade ago the then government set a target that 10 per cent of the Irish vehicle fleet would be electric by 2020, meaning 240,000 electric vehicles on our roads. We’re likely to be 230,000 shy of that target by the end of next year.

A million electric cars by 2030. It sounds fantastic and it is time to do the maths to see if it is realistic.

This is not the first time an Irish government has made grand electric vehicle plans. A decade ago the then government set a target that 10 per cent of the Irish vehicle fleet would be electric by 2020.

So how likely is it that we can reach a target 10 times greater over the same time period?

Let’s take the passenger car market for example. There are just over 2.1 million private cars on our roads.

Average annual sales are between 120,000 and 150,000. To meet the target virtually every new car sold in the next 10 years will have to be electric.

Is this a realistic expectation? Especially when the promised recharging infrastructure remains so poor.

It is not that consumers aren’t eager or willing to change: it’s just that right now there simply isn’t the choice or supply and that is before you deal with cost and practicality.

Dealers report that nearly every customer through the door these days asks about electric cars. But the reality is the choice is not available for many buyers.

Here is another example: out of 279 different models of car that have recorded sales in Ireland so far this year, just 12 are fully electric.

Even when the car companies do launch new electric models, demand is going to far outstrip supply as big markets like China and mainland Europe are seeking ever more electric cars as well.

Irish distributors are already having to fight hard to secure the current limited supply for Ireland.

Then there’s cost. While a handful of buyers will be able to avail of the limited supply of imported used electric vehicles, the simple fact is that the electric models are new to the market meaning most people will have to buy a new or relatively new car.

And those prices are after availing of the current grants, which come to €10,000 per car.

In all likelihood the Department of Finance will call time on these grants if electric car sales start to pick up and the cost to the Exchequer soars.

The simple reality of the market at present is that electric cars are more expensive than their petrol or diesel equivalent.

So will Irish car buyers over the next ten years be prepared to stump up more - or borrow more - to fund the changeover to electric?

It will need virtually every one of them to do so if we are to meet the one million target.

Then there is the fleet market, financed by leasing operations.

Many of these have been loathe in the past to offer competitive rates for electric vehicles, fearing that as technical developments improve the range of these vehicles, they would take a big hit on the residual - or resale - values of the earlier electric cars.

The range of these vehicles is still under development, with promises of 500km-plus per charge in the near future. That will hit the values of older models which can only deliver 90km per charge.

The Minister for Climate Action Richard Bruton sensibly suggested on Monday that many businesses running vans to do short distance deliveries could convert to electric.

That makes sense. However, that’s still not going to make a dent on the Government’s target. The light commercial vehicles market is currently running at 25,000 a year. Again it would require every new vehicle sold to be electric to make any sort of step towards the grand plan.

Finally there is talk of the demise of the fuel forecourt.

Ultimately petrol stations will face new competition from anyone with a decent electrical supply and a plug socket.

Hotels and shopping centres see the opportunity to offer discounted or even free recharging to motorists, knowing that it means they have a captive audience while the car is charging. To survive, the current forecourts need to offer safe places for people to wait while their car is recharging.

Safety, comfort and convenience will be the strong points for the successful forecourts that survive. No one wants to hang around a garage forecourt at night while their car is charging.

However, even if the Government’s one million target is achieved, that will still leave several hundred thousand older vehicles using petrol or diesel on the road. So post-2030 when a ban on the sale of new combustion engine vehicles is in place, there’s likely to still be a significant number of legacy older vehicles.

One certainty is that whether we hit the one million target or fall short in the next decade, motor dealers are going to be delighted, with a boom time ahead for the trade as buyers increasingly focus on new models as there are so few second hand electric cars.

All the dealers have to do then is find a home for the 2 million petrol and diesel cars which will gradually come off the road.

Expect to see a lot of used Irish registered vehicles sitting on the docks in Nigeria, Namibia and other right-hand drive markets that haven’t yet embraced the electric dream.

The Government’s plan is ambitious, admirable and understandable. However, starting from here, it does not appear realistic.