Weakening of Gulf Stream could result in rapid temperature increases 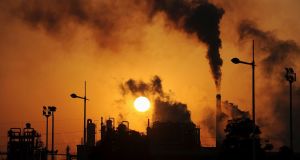 Between 2014 and 2017, the world has experienced the four warmest years on record. Photograph: Stringer/Reuters

A weakening of major ocean currents in the Northern Atlantic, including the Gulf Stream that warms Ireland, could trigger a sudden change to Ireland’s climate that could last for two decades, Irish scientists have warned.

Rather than leading to a period of cooling, however, it could result in rapid temperature increases across the country, according to the Maynooth University team.

Such changes could have disastrous outcomes for the global climate and make the urgent need to deal with climate change more difficult, the team declares, in research published by the journal Nature.

Dr Gerard McCarthy and Prof Peter Thorne of Maynooth’s Irish Climate Analysis and Research Units (ICARUS) analysed research by Professors Xianyao Chen of the Ocean University of China and Ka-Kit Tung of the University of Washington.

The best-known of these currents in Ireland is the Gulf Stream, which has long been widely recognised as protecting Ireland from extreme weather and giving the country its famous wet and mild climate.

Globally, the AMOC has been seen as a vigorous force associated with elevated surface temperatures across the Atlantic, but the new research highlights its role in storing heat in the deep ocean”.

The AMOC is now at its weakest in at least 1,600 years. Past AMOC changes have been associated with abrupt climate changes. Global surface temperatures rose steadily from 1975 to 1998, but growth then slowed for 15 years.

Between 2014 and 2017, however, the world has experienced the four warmest years on record: “Interest in this hiatus and what caused it has, therefore, waned considerably,” Dr McCarthy explained.

However, climate change is a complex response to slowly-varying external factors, so “it is essential to re-examine and try to fully understand previous climate behaviour and its underlying causes”, say the Irish duo.

The Chinese research may hold the key to explaining this hiatus, and that understanding the mechanics behind it can help us prepare for future climate change.

Atmospheric concentrations of greenhouse gases are increasing at an unprecedented rate, something which is widely understood as driving global warming.

Chen and Tung argue that half of the heat arising from such gases is stored in the deep waters of the North Atlantic when the AMOC is strong, which reduces overall global warming.

The 1975/1998 lull, when the AMOC was robust and strengthening, may explain the reduction in global warming that took place because it was “so effectively” able to transfer heat deep into the ocean, Dr McCarthy said.

Now, however, the AMOC will “very likely” weaken in coming decades. Indeed, the Atlantic has seen muted rises in surface temperatures relative to the global ocean over the past few decades.

Scientists have already observed that the AMOC is weakened and that “the Atlantic is surprisingly cold suggesting that it is not effectively storing heat in its lower levels”.

If rapid global surface warming on sea and land results, this could “have disastrous outcomes for the global climate and make navigating the challenges of global climate change even more difficult”, Dr McCarthy added.

Man who allegedly spat at garda and said he had coronavirus due in Cork court 10:35
Irish flight bringing PPE from China due in Dublin in afternoon 10:29
Coronavirus: Sweeping powers with fines of up to £5,000 come into force in North 07:56
Leading Northern Ireland lawyer in critical condition because of coronavirus 22:12
Coronavirus: No funeral Masses to be held in Clogher diocese 22:03