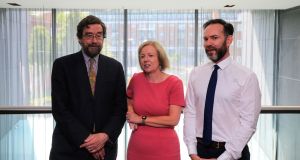 Ireland cannot meet targets to cut greenhouse gas emissions by 2020 and is completely off the course it needs to follow to achieve other carbon reduction goals, the Climate Change Advisory Council has said.

At the publication of its annual review on Wednesday, council chairman Prof John FitzGerald said the policies being pursued to try to reverse Ireland’s record were inadequate.

“The recession was the only policy which worked so far in making a really big change,” he said, noting 2016 emissions increased by 3.6 per cent (2 million tonnes) and were back to levels last seen as the economy was crashing in 2009.

In order to decarbonise the economy by 2050, Ireland needs to produce 1 million fewer tonnes of carbon per year, which would require a complete reversal of the current trend.

Nine years ago Ireland was given a target to, by 2020, reduce emissions of greenhouse gases to 20 per cent below what they were in 2005. Ireland has consistently lagged behind in reaching these goals and is on target to have reduced its emissions by less than 1 per cent come 2020.

Climate and energy experts estimate Ireland will face fines from Europe of up to €600 million a year after 2020 until it meets the targets, but the Government has insisted the penalties will not be this large.

Prof FitzGerald said “the problem is there isn’t a policy framework” to try to reach the targets. The council’s role is to monitor the country’s progress and to offer advice to Government on shaping policy. However, he added “it is not our job to make policy”.

There was a need to increase carbon taxes to drive alternative energy approaches but this required cross-party consensus in a Dáil where the Government did not have an overall majority, Prof FitzGerald said.

Laura Burke, director general of the Environmental Protection Agency (EPA) and a member of the advisory council, said despite the lack of progress in reaching targets, there appeared to be an increasing public awareness of the impact of climate change.

“Previously in Ireland people would have been thinking about climate change as something that’s going to happen in the long [TERM], somewhere else,” she said.

Prof FitzGerald called for incentives to encourage people to make changes in their behaviour in order to cut emissions.

Responding to the report, the Minister for Climate Action Denis Naughten said he shared the council’s frustration and that latest progressions on green house gas emissions were “deeply disappointing”.

He said the transport and agriculture sectors and Ireland’s growing economy had “contributed significantly” to the increases but that the Government was “doing everything it can to ensure that we, as an absolute minimum, meet our 2030 target”.

He said the Department of Finance was finalising a review of the State’s carbon tax policy.

Fianna Fáil described the findings as a “damning indictment of the failure of this Government to address climate change”.

The Stop Climate Chaos coalition, which has 33 member groups, said the findings of the review were “disappointing but not surprising”.

0.7 million tonnes - the rate of increase in the energy producing sector

0.5 million tonnes - the rate found in both agriculture and transport

€20 per tonne - the current rate of carbon tax in Ireland