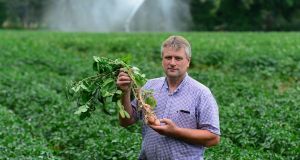 David Rodgers, the second generation of his family growing potatoes in Ballyboughal, and his father have never experienced anything like it.

So parched is the earth in this famously lush and fertile north Co Dublin countryside – renowned for its food produce – that potatoes are not growing at all.

“There is definitely going to be a scarcity of potatoes and vegetables in Ireland, ” he says gloomily, “I think it will start hitting in the next two to three weeks.

“You might go to the shop and see there is no carrots, parsnips or turnips for sale. You might have to look for pasta or rice instead of potatoes,” he says.

One of four brothers who grow Queens, Kerr’s Pinks and mostly Roosters over 250 acres, they supply Country Crest, which in turn supplies Tesco.

Rodgers says the unprecedented conditions over recent weeks – from an exceptionally cold spring to a record-breaking hot summer – have forced his potato plants into “shutting down”.

Even more unusually, as they come out of dormancy with milder temperatures returning, they are essentially “going to seed underground”. This means no potatoes.

“We’re looking at half of the crop not making it,” he says.

“We have never seen this before, we don’t know what to do. We’re very concerned.

“Our native varieties never really had to withstand temperatures of 30C before.

“I know there was a trial done to try and grow Roosters in Spain, and they wouldn’t grow – maybe now we know why.”

The experts appear to be equally flummoxed and are ringing around their counterparts in the UK and further afield for solutions.

Mr Rodgers spent €50,000 on irrigation equipment and drilling a well, but the new water system can only reach 50 acres – a mere fifth of his crops. He is up during the night checking on it.

There are 250 potato growers in Ireland, from small farmers with a few acres to big commercial firms. The top-producing 150 are behind nine out of every 10 spuds eaten in Ireland.

But even the big growers do not have ready access to irrigation.

Three-quarters of the national crop is not getting any water, says Shay Phelan, a potato expert with State agriculture and food agency Teagasc, who is battling to help growers cope with the crisis.

In many cases, where fields are rented for a year, it makes no financial sense to bore a well. The failed crops will be left to nature.

Phelan estimates that the tonnage of potatoes harvested in Ireland this year will fall by a fifth “easily”. If the dry spells continue, this could plunge much more dramatically.

Donegal growers are doing better than most. The country’s core band of producers, running from Meath along the east coast to Wexford and into Cork, are worst hit by the drought.

While restaurants and chip shops face higher costs for their usually imported supply – a global shortage is also looming – households around the country could be forced to ration the nation’s favourite staple.

“I don’t think we’ll be running out in the chip shops come December or January, but they will be supplied at a price,” says Mr Phelan.

“They will be scarcer.”

In Ballyboughal, Mr Rodgers is sombre, looking over his fields.

Like everyone he has his outgoings – not least, three sons: one studying agriculture in UCD; one just finished his Leaving Certificate and hoping to go to DCU; and the youngest studying for his Junior Certificate.

“It doesn’t look good. Growers are only realising it now when they look at the crop and see these sprouts growing out of the potato,” he says, “It could be devastating, I don’t even want to go there.”