An Bord Pleanála grants permission for scheme between Baldoyle and Portmarnock 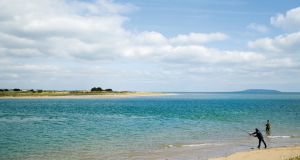 Baldoyle track will facilitate cyclists who use a narrow winding road. It is also expected to attract walkers.

A new cycle and walkway has been given the go-ahead between Baldoyle and Portmarnock in north Dublin following years of campaigning.

An Bord Pleanála granted planning for the scheme on Thursday subject to conditions designed to protect the adjacent nature reserve at the Baldoyle estuary.

The track will facilitate cyclists who must currently use a narrow winding road. It is also expected to attract significant numbers of walkers and form part of an overall scheme connecting the north Dublin coastline.

Local Social Democrats councillor Cian O’Callaghan said the decision was a victory for hopeful residents and that construction should begin next summer. A tender process is now likely to follow.

The application for the 1.8km route was submitted by Fingal County Council earlier this year and it will be built on its lands running alongside the road on the inland side of the adjacent estuary.

Mr O’Callaghan noted that a condition of the planning was that bollard-mounted lighting would be used projecting towards the path and subject to night-time dimming. He said the route would eventually form one part of a longer track running from Sutton to Malahide, a poplar amenity for both local residents and tourists.