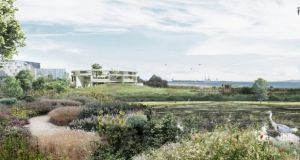 An artist’s impression of the proposed interpretative centre and spa shows Booterstown bird sanctuary in the foreground.

Environmental groups have called on Dublin local authorities to reject developer Paddy McKillen jnr’s plans for a five-storey “biodiversity” centre at the edge of Booterstown marsh, describing it as an attempt to build a commercial leisure centre beside one of the city’s most important conservation areas.

Mr McKillen’s company Soundvale Ltd wants to build a 21.55m-high “recreational and interpretive centre building” with a “range of associated biodiversity proposals” on the Merrion Road opposite the former Tara Towers hotel.

The scheme would include a creche, cafe, health studio, a gym, indoor and outdoor pools, a jacuzzi and hydro pool, treatment rooms, sauna, salt room, steam room and a members’ area.

Applications for the development have been lodged with Dún Laoghaire-Rathdown County Council and Dublin City Council, with the site straddling both local authority areas.

An Taisce and the Friends of Booterstown Coast have said the scheme does not comply with the development plans of either local authority, would have an unacceptable impact on the neighbouring protected marsh, particularly on its rare bird species, and was primarily “a commercial leisure development”.

An Taisce, which has managed Booterstown marsh for almost 50 years as one of its “properties in trust”, described it as one of the “city’s key biodiversity areas” and the only remaining saltmarsh on the south shore of Dublin Bay.

The marsh is a protected Natural Heritage Area and Special Area of Conservation and important feeding and roosting area for ducks, geese and waders, An Taisce said. It was an “essential resting spot for migratory birds”, with species including moorhens, reed buntings, sedge warblers, teals, snipes, lapwings, oystercatchers, redshanks, dunlins, and brent geese all using the marsh.

Both local authorities had zoned the McKillen site as amenity, open space and “green network” lands. Certain developments such as creches, cultural and recreational buildings and cafes could be permitted in exceptional services.

An Taisce said such circumstances had not been demonstrated. “We consider the large scale and private commercial nature of the proposal is inappropriate for the site.” The scale and height of the proposed building was “excessive” and “out of character” for the coastal area.

The development was “first and foremost a commercial venture based around mostly indoor leisure facilities and dining options” that would be “more appropriately located in the hotel that is currently being redeveloped across the Merrion Road”, it said.

Friends of Booterstown Coast said “in every aspect this is clearly a business commercial concern”. The building and its glass facades posed “bird collision risks”. Birds could also become disorientated from nighttime light pollution, it said.

The group noted the biodiversity proposals but said biodiversity educational activities were already provided at the marsh by An Taisce, “all facilitated at no cost to the public”.

Independent Senator Victor Boyhan said both local authorities needed to develop a strategy for the landbank between the Merrion Gates and Blackrock Park, including this site.

Soundvale said the biodiversity proposals include a new coastal meadow, a coastal tree belt, and a coastal grass and shrub internal garden.