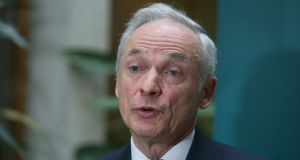 Minister for Climate Action and Environment Richard Bruton wants to make the use of brown bins for compostable waste compulsory for all households within the next two years. Photograph: Damien Eagers

Thousands of Dublin households, currently exempt from having wheelie bins at their homes, may have to accept brown bins under new waste management rules.

Minister for Climate Action and Environment Richard Bruton wants to make the use of brown bins for compostable waste compulsory for all households within the next two years.

However, Dubliners living on almost 1,000 streets in the capital currently have an exemption from the use of wheelie bins.

Rules requiring the use of wheelie bins instead of refuse sacks came into force in July 2016, but following objections from householders mostly living in terraced housing with no front gardens and no direct access to the back of their homes, more than 900 streets were exempt from the rules.

The exemption covers most homes in Stoneybatter, the Liberties and hundreds of Streets across Dublin 1, 2, 4, 6 and 7, which continue to leave refuse sacks outside their doors.

However, Mr Bruton said “we need to find a way” of introducing brown bins to all households. “We recognise there are going to be difficulties in implementation and we need to work with the people, but I think that the contemplation of difficulty has stopped us doing this in the past,” he said “We have to get over those difficulties and not just say there are difficulties and we won’t address them.”

Adequate time was being given to ensure any difficulties with the introduction of the brown bin could be ironed out he said.

“We are giving people an opportunity to consult and any changes will come over time. It will be two years before we have implemented the full brown bin in its entirety.

“We will work with both residents and local authorities to make this effective, but the truth is that half of organic material is either ending up in your black bin or in your green bin that is very bad use of a material and it is contaminating streams which we seek to recycle or reuse.”

Other planned measures include levies on non-recyclable plastics such as food packaging in supermarkets, a levy on tobacco companies to cover the cost of cleaning up cigarette butts, and a crackdown on “fast fashion” to stop clothes ending up in the bin.

“We are trying to deal with a problem where there is a profligate use of resources with a throwaway culture around certain fashion items. They may be cheap as well but that cheapness comes at a price.”

“In terms of fashion it is not good economics for any household to be throwing out materials so quickly, and a lot of the fast fashion isn’t aimed at just trying to make low incomes stretch, this is a very well planned and executed strategy by companies to sell more fashion,” he said.

“This is not really about having hard-wearing clothes for people on low incomes that they can get a good life out of.”