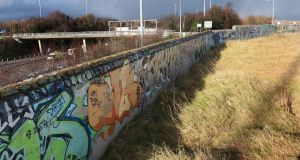 The site at Oscar Traynor Road, just to the east of the entrance to the Dublin Port Tunnel, which is valued at €44 million. Photograph: Nick Bradshaw

Land hoarders across Dublin city and county face a bill of almost €30 million from January for failing to develop sites that could be used for housing.

The four Dublin local authorities have just over 100 plots of land on their vacant sites registers, with a total value of €304,335,000. The majority of these sites, 64, are in the Dublin City Council (DCC) area where land worth almost €196 million is liable for levies.

Since January 2019 owners of sites on the register that was set up to bring prime housing lands into use, have had to pay levies of 3 per cent of the value of their land, but from January 2020 that charge rises to 7 per cent.

However, almost all landowners on the register have failed to pay any charge, meaning they will have to pay 10 per cent of the site value this year to clear their debts.

Revenue from the levy goes to the relevant local authority.

Just €640,950 has been paid by private landowners to date under the scheme, all of which has been received by the city council. Separately, the council has paid €1.8 million in levies in respect of its own vacant sites, which must be ringfenced for housing or regeneration purposes.

DCC has issued demands for a further €1.1 million in levy payments to landowners which remains outstanding. No payments have yet been made to the other three Dublin local authorities.

The highest value site on the register is owned by DCC, a 17-hectare site at Oscar Traynor Road, just to the east of the entrance to the Dublin Port Tunnel, valued at €44 million. The council owns 19 sites on the register, most, including the Oscar Traynor site, have been designated for housing which has yet to be built.

In the Dún Laoghaire-Rathdown area, there are 18 vacant sites registered, 13 of which have a combined value of €52.4 million, with five more awaiting valuation.

The county council previously had the most valuable vacant site nationally on its register, land owned by Horse Racing Ireland (HRI) in Leopardstown, valued at €66.5 million. However, shortly before the levy became payable last January HRI successfully argued it should escape the fine because the land was being used as a car park.

The highest valued site on the Dún Laoghaire-Rathdown register is now a €12 million plot in Foxrock where Cornel Living Limited plans to construct 469 build-to-rent homes.

The council said it has yet to seek levy payments from any of the landowners on the register.

In Fingal nine sites, five with a total value of €32,680,000 and four remaining to be valued are on the vacant sites register. Two of the sites have been valued at €13 million each. Both are owned by Glenveagh Homes and are in the Tyrrelstown and Hollystown area. Fingal County County Council has not issued any demand for payment of the levy to date.

South Dublin County Council has 13 sites on its register, valued at €23,345,000. The highest value site, worth €5.9 million, is owned by Crekav Ltd, which owns several large housing sites around the capital, including lands beside Anne’s Park in Raheny where the company is seeking to build more than 650 apartments. The council said it expected to seek €500,000 in levy payments in 2020.

While, only a fraction of the levies owed have been paid to date, the threat of the charge has resulted in sites being brought into productive use. In Dublin city the council has issued 134 “notices of entry” that properties were being put on the register, which spurred a number of owners to either develop or sell their lands.

“There are 31 sites now under construction, that is a good thing, and 10 sites have changed ownership, and that is potentially a good thing,” says Helen McNamara, senior executive officer in Dublin City Council’s active land management unit.

To be hit with the levy, the vacant sites must be bigger than 0.05 of a hectare, excluding gardens. The majority of the site must be “vacant or idle” for more than 12 months, be zoned for residential or regeneration purposes, and be in an area in need of housing.