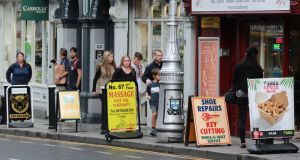 Just one Dublin business has been issued with a licence to erect an advertising sandwich board on the street outside its premises since new regulations and a €630 annual fee were introduced in September.

Sandwich boards have been seized from almost 150 unlicensed businesses since Dublin City Council said they must apply for permission to place the advertisements on footpaths outside their premises.

Council chief executive Owen Keegan has ordered a “zero-tolerance” approach to unauthorised signs on footpaths and owners face a €100 retrieval fee for their boards and mounting storage fees if they refuse to pay up immediately.

The only licence issued so far has been to Basecamp, a sports equipment and clothing store on Jervis Street. Just nine businesses have made applications, but only two were correctly completed, with the council still assessing the second of these.

The council has issued 550 warning notices to businesses to remove unlicensed boards. Most have complied, with the council seizing 149 boards from 132 businesses which ignored the warnings.

Just 22 owners have opted to pay recovery and storage fees amounting to €2,771.

Only businesses on certain streets are eligible to apply for a sign licence with advertising boards banned completely outside protected structures, such as Georgian buildings, and in 23 architectural conservation areas (ACAs).

O’Connell Street, Grafton Street, Capel Street, Dawson Street and the area between Grafton Street and South Great George’s Street are all within ACAs. Suburban areas including Phibsborough, Sandymount and Ranelagh are also covered by the designation.

Cafes and restaurants are already liable for licence fees for putting tables and chairs outside their premises, but until September there was no licensing system for sandwich boards.

Boards not retrieved by their owners are “donated to worthy causes” the council said and have “to date been donated to community men’s sheds and tidy towns committees for recycling/upcycling”.

While some business organisations branded the crackdown on sandwich boards as heavy-handed and an unfair imposition on struggling businesses, disability groups have long called for the council to take action against “street clutter”.