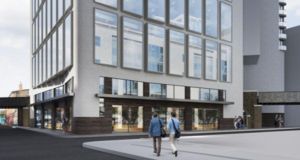 An architect’s illustration of the proposed building at Townsend Street in Dublin.

A planning application to build above the railway line in Dublin city centre as part of an 11-storey office and apartment rental scheme has been lodged with the city council.

The application to build either side of the railway line and in the space above it as well as within the arches supporting the railway tracks would be the first time the city’s ‘Loopline’ between Pearse and Connolly stations would be encased by development.

The application was lodged on December 18th by John Spain and Associates on behalf of developer Eric Kinsella’s Esprit Investments Ltd.

Irish Rail, which has agreed to the submission of the planning application, said should the development proceed the transport provider’s sister organisation CIÉ Property “would seek a continuing income stream from the development”.

Plans envisage the demolition of all existing buildings, excluding the railway line, on a 0.26 hectare site bounded by Townsend Street, Brunswick Villas, Shaw Street and Spring Garden Lane, all of which lie between Pearse Street and the Liffey.

The new building would comprise an 11-storey office, retail and build-to-let residential development with 19,908sq m of gross floor area.

The new building would “bridge over the railway line” at fourth-floor level, about eight metres above the railway tracks.

Two retail units are to be provided at the junction of Shaw Street and Townsend Street within the railway’s supporting arches. There would also be two cafes within further arches. The plan also envisages “public realm improvements and the provision of a “new pedestrian street parallel to the rail line”.

Previous applications for developments close to the railway line in the city centre – including an already approved plan for a 22-storey tower at Tara Street and George’s Quay – avoid building directly in the air space above the train tracks.

The only instances of buildings being constructed above Irish Rail’s lines until now have involved the development of Croke Park and the Aviva Stadium. An office building was constructed over the Luas green line at Balally station in south Dublin as part of the the tram development which opened in 2004.

The Loopline railway viaduct through the centre of the city was built about 1891 to carry the City of Dublin Junction Railway, connecting Connolly Station (formerly Amiens Street) with the line to Dún Laoghaire.

The section of the railway line affected by the proposed development lies between Tara Street station and Pearse station.

Also in the immediate area is College Gate, a complex of 70 apartments on Townsend Street, next to Tara Street Dart station, which has been earmarked for acquisition and demolition for the construction of an underground station for the €3 billion Metro Link line.

The Markievicz leisure centre, refurbished two years ago by Dublin City Council at a cost of more than €1 million, would also require demolition under the plans published by the National Transport Authority and Transport Infrastructure Ireland.