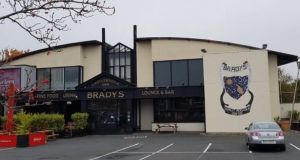 An Bord Pleanála has given the go-ahead for the scheme at the site of Brady’s pub on the Old Navan Road in Castleknock, west Dublin.

The decision to grant permission for a 200 room “co-living” accommodation block on the site of a former suburban pub has been criticised as an example of new rules “slowly dismantling” community orientated planning.

An Bord Pleanála has given the go-ahead for the scheme at the site of Brady’s pub on the Old Navan Road in Castleknock, west Dublin.

It was filed by Bartra Property under strategic planning laws that allow for large developments to proceed directly to the planning appeals body.

An Bord Pleanála ruled against the recommendations of its own inspector, a bone of contention with local opponents.

In its decision note, it said it had done so as the location was in keeping with sustainable urban housing standards.

It said it was satisfied the development met requirements for shared accommodation in terms of common living and kitchen facilities.

One of the planning conditions is that the bedrooms must include functional kitchens including cooking hobs.

However, the decision has drawn political criticism, particularly regarding the “co-living” model.

Labour TD Joan Burton, in whose constituency the development is based, said the decision was “a sad outcome of the new planning guidelines by Minister Eoghan Murphy”.

She said the developer was being allowed to make a “financial killing” which would spark further similar developments in suburban areas.

“Shared living developments of this kind will never create sustainable communities and are entirely inappropriate to a suburban location.”

The development will see the demolition of the old pub and the construction of 198 rooms in a five storey scheme referred to as a “built to rent shared living residential development” of 6,549 square metres.

In making its decision An Bord Pleanála said it had taken into account several factors including the Rebuilding Ireland Action Plan for Housing and Homelessness; the site’s proximity to Connolly Hospital and Blanchardstown town centre; and residential zoning.

“Prior to the commencement of the development, the developer shall submit details of a proposed covenant or legal agreement which confirms that the development hereby permitted shall remain owned and operated by an institutional entity for a minimum period of not less than 15 years and where no individual residential units shall be sold separately for that period,” it said.

“Bartra Capital will proceed with the development and implement all conditions outlined by An Bord Pleanála .”