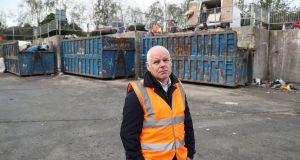 The Environmental Protection Agency has issued its first licence to process large volumes of Irish construction and demolition waste. The licence, issued to Panda waste management company, will facilitate its reuse as a product in road construction.

In Ireland, close to zero construction and demolition waste is recycled. Due to the continued classification of these materials as “waste”, the only outlet previously available was disposal at “non-hazardous” landfills. Separately, there are persistent environmental problems with the level of illegal dumping of such waste, especially in isolated rural areas.

Recycled aggregate – such as sand, gravel, crushed stone, slag, and recycled concrete – makes up almost one third of the aggregates used in new-build housing in the UK.

The Construction Industry Federation has repeatedly highlighted that regulations governing these by-products are “confusing and outdated”, which makes moving clean soil and stone or crushed concrete extremely difficult, as there are few licensed facilities available to receive these products.

Its licence will allow the processing of this material by crushing, screening, removal and separation to produce a reusable material known as “greenrock” which will be used in the construction of a new road on an EPA-licensed site in Ireland.

Beauparc’s renewable energy and sustainability director David Tobin said it was a significant first step in reuse of this material in Ireland and would help towards meet Irish and EU targets for transitioning to a circular economy.

“We are committed to delivering on the circular economy goal of recycling resources and materials and returning them back to the economy to be used again. This is crucial if we, as a society, want to meet the UN’s sustainable development goals,” he added.

People understood that other materials which used to be considered waste should now viewed as a valuable resource, “and we believe construction waste should be no different”.

The creation of new products from construction and demolition waste not only diverts materials from landfill, but “also reduces the extraction of finite aggregates resources from quarries, thereby reducing the impact on the environment”, Mr Tobin said.

In a separate “end of waste” application, Panda is building a major recycling facility for plastics which is due to come into operation this year. Most recycling of plastics, where possible, is conducted abroad – though there is limited capacity to recycle plastic bottles in the Republic.