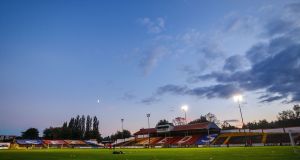 If sold, €15m from the sale of Tolka Park football stadium, pictured, would be used for the development of Dalymount stadium. Photograph: Oisin Keniry/INPHO

Dublin City Council chief executive Owen Keegan wants to sell off more than €100 million worth of council-owned sites, instead of using the land for the construction of social housing.

Mr Keegan insists he needs to sell at least 15 high-value sites in order to fund culture, sport and recreation projects in the city, despite warnings from local politicians that the sites should be used to build homes.

Among the sites proposed for sale are Tolka Park football stadium, €15 million from which would be used to redevelop Dalymount Park stadium; the College of Music on Chatham Row, which has been deemed “unsuitable for conversion to residential”; and sites on Thomas Street and in Dolphins Barn, which Mr Keegan believes should not be used for social homes because of the “high concentration” of social housing nearby.

However, councillors last year agreed that council-owned land in the city “must be used for public housing”, with some 19,000 applicants on the local authority’s housing list.

The controlling group on the council – Fianna Fáil, Green Party, Labour and Social Democrats – last June signed an agreement to “reject any selling off of publicly owned land to private developers within the city” unless there was a “clear evidence-based justification that the monetary benefit to the council far outweighs the long-term social and economic benefit foregone in terms of the necessary development of housing and other public uses”.

Mr Keegan said he was “conscious” councillors had “a preference to develop social housing on council-owned lands” but he said there was a “significant number of projects” that “will require funding from the disposal of city council sites/properties if they are to proceed”.

“The majority of the sites have lain idle for many years and detract to a serious degree from their surrounding areas,” he said, adding that he did not believe housing was an “appropriate” use for the sites. “When developed these sites will act as catalysts for regeneration and enhance the built environment in the areas in which they are located.”

Councillors have already approved some site disposals, including lands at O’Devaney Gardens and a site beside the former Manhattan Cafe near Harcourt Street, valued at €9 million.

However, Mr Keegan said the lands he is proposing to sell would yield at least €91.5 million more, with the prospect that this list “may be added to”.

The list will be presented to councillors on Monday night. Mr Keegan said he was not seeking approval at this time and each individual proposal for disposal would be presented separately.