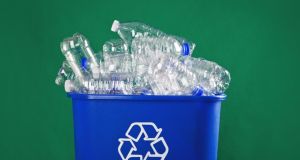 The Government is committing to a collection rate of 90 per cent for single-use plastic drinks bottles by 2029 Photograph: iStock

The best way to deliver a 90 per cent collection target for single-use plastic bottles, and how a deposit and return scheme (DRS) might operate in Ireland, are to be evaluated in a major review commissioned by Minister for Climate Action and Environment Richard Bruton.

Plastic waste causes chronic pollution; damaging cities, countryside and oceans – and contributes to climate change as its break down.

Mr Bruton said he is committed to significantly increasing overall plastic recycling rates to 55 per cent by 2030.

For single-use plastic drinks bottles, the Government is committing to a collection rate of 90 per cent by 2029. But new EU regulations will require adoption of more demanding targets.

The 2017 Waste Reduction Bill sponsored by the Green Party, which proposes a ban on single-use plastics, and a DRS on plastic bottles and aluminium cans, has passed initial stages in the Oireachtas.

The DRS option has met with resistance among Irish retailers and the recycling industry including Repak.

The review, details of which will be announced on Monday, will focus on the best model to achieve the more ambitious target, Mr Bruton said in advance.

It will look at the current Irish waste collection system, international best practice and how Ireland can bridge the gap from the targets already being achieved to the new, higher target.

“On average, every person generates approximately 58kg of plastic waste per year. Plastic waste makes a major contribution to the chronic problem of pollution, damaging our cities, countryside and oceans,” he added.

“If we are serious about making Ireland a leader in responding to climate change, we must tackle our plastic waste. We must stretch ourselves and commit to more ambitious plastic collection targets, if we are to put ourselves on a more sustainable path.”

On the DRS, he said it was one option that would looked at. “I want to learn from international best practice . . . Once the review has been completed, I will move quickly to set out the actions we must take in this area.”

A number of EU states have successful DRSs in place, some of which deploy reverse vending machines (RVMs) where bottles are returned.

The Government have consistently exceeded the current EU plastic recycling target of 22.5 per cent, with the most up to date figures showing Ireland recycled 36 per cent of plastics in 2016.

Mr Bruton will seek a cost benefit analysis of implementing alternative, complementary collection models and clear understanding of how best to achieve a higher collection rate for beverage containers with consideration to any likely impact on existing waste collection systems including the main one operated by Repak.

It will look at any impact on existing kerbside collection and management of public authority waste infrastructure such as litter bins.

The review will also evaluate the level of deposit needed to effect behavioural change and alternatives to RVMs if a DRS is being introduced. It will also analyse if it is likely to lead to less litter and reduced litter management costs, and spell out cost effective models that could include other extended producer responsibility initiatives.

The EU Circular Economy Action Plan, which includes the single-use plastics, is set to be agreed within the next 6 months. It will potentially see a new collection rate of 90 per cent for certain waste materials, namely beverage containers (including caps and lids) which are a primary target for improved collection rates.

In addition, the Circular Economy Legislative Package will see overall EU packaging recycling targets increase to 65 per cent by 2025, with material specific targets for plastic and aluminium of 50 per cent by 2025.