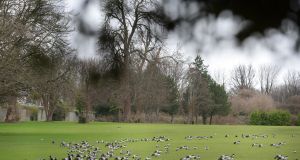 Brent geese feeding on grounds next to the proposed site for residential units in Raheny. Photograph: Dara Mac Dónaill

Property developer Pat Crean has described as a “stark and tragic” irony that homeless people are sleeping in St Anne’s Park in Raheny, next to his site where permission for more than 500 homes was refused last year by An Bord Pleanála.

In a letter to Dublin city councillors Mr Crean has indicated, for the first time since the board’s refusal last September, he still intends to pursue the redevelopment of the former playing fields east of St Paul’s College, beside the park.

The board had initially granted permission for 104 houses and 432 apartments on the St Paul’s College site to Crekav Trading, a subsidiary of Crean’s Marlet Property Group, but that decision was the subject of a High Court challenge.

The action taken by Clonres CLG, representing residents from the Clontarf area, and two environmentalists, was the first challenge to a decision made under the State’s new “fast-track” planning system where large-scale housing applications are determined directly by the board not local authorities.

Last July, the High Court said the application should be returned to the board to allow it to reconsider matters and make a fresh order on the planning application.

In an email to councillors, Mr Crean said he had recently visited Raheny and found homeless people “sleeping rough just off the main avenue in St Anne’s Park, just 30 metres from our site”.

He said 54 of the homes planned for the site would have been used for social housing.

“I am sure I do not need to point out the irony of seeing this right beside the site where we continue to struggle to begin work to develop badly needed houses.

“In the next few months hundreds of thousands of euros will be spent on consultants and lawyers (including by the State) as we move into the next round of the court process to show that the geese from Canada are happily feeding in alternative feeding grounds.

“Yet the homeless people will continue to sleep in the park. The irony is both stark and tragic.”

Mr Crean said he would like to meet councillors to discuss the site.

The letter was “shameful”, according to local Independent councillor Damian O’Farrell.

“It is shameful that the developer is using the homeless situation and the plight of unfortunate individuals for his company’s gain. It is only right that An Bord Pleanála and the State would defend Irish and EU environmental legislation.”

“The email is both offensive and pointless. The factual situation is that An Bord Pleanála refused the application outright. Councillors had no role in that, and don’t have any role in the process.”

Fine Gael councillor Naoise Ó Muirí said that if Mr Crean wanted to discuss his plans for the site, the appropriate forum would be a city council meeting. “Any meeting should be held in public, not behind closed doors.”