Snow and sub-zero temperatures forecast for this week

Temperature will fall to minus five degrees on Wednesday 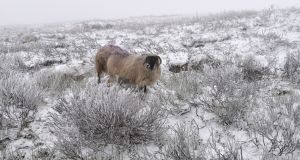 Temperatures will fall as low as minus five degrees this week with the possibility of snow in parts of the country in the coming days.

Met Éireann forecaster John Eagleton said there was a chance of snow in the west late on Thursday, though with easterly winds it could also affect the east of the country.

“It could affect the east but it won’t cause any problems. It will be light enough. The bottom line is it’s going to be cold this week.”

A spell of rain will hit the west and southwest later on Monday and become widespread by Tuesday morning, turning wintry with the risk of some accumulations of snow on higher ground, he said.

“Wednesday will be a clear, bright day,” he said. Wednesday night will turn very cold with lowest temperatures falling to as low as minus five degrees.

Thursday will see further rain, sleet and snow with afternoon temperatures of just one to seven degrees in easterly winds.

Meanwhile, rock band Bastille cancelled its sold-out gig in the Olympia Theatre in Dublin on Sunday night as a result of disruption caused by weather conditions.

In a statement, the British band said: “We’re gutted that our gig in Dublin tonight has had to be postponed. We’ve been trying everything possible in the last 24 hours to get the tour trucks and buses to Ireland, but the bad weather has meant all ferries have been cancelled and none of our gear will be able to make it in time. Huge apologies to everyone with tickets and anyone who’s travelled.”

The band asked ticket-holders to keep their tickets while it works to reschedule the gig as soon as possible.