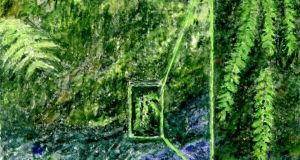 Crouched beneath the windows on the seaward side of the house, our old greenhouse has sad holes in its roof. The big one is where a storm tossed a heavy ridge tile off the house. Lesser gaps are from the gales causing things to slide.

I built the greenhouse, in 1983, with my father’s ways in mind – panes of glass, lots of little nails and putty squeezed from the fist. Today it would be shatterproof plastic and mastic.

With such ease of access to the greenhouse, nature has taken up residence – above all, the ferns. Keen Victorian pteridophytes grew them in their parlours in sealed glass cases, proof against the smoky urban air. I now have a greenhouse with rampant male ferns, stocky hart’s-tongue, and delicate maidenhair spleenwort curling up the pillars.

Praeger, the great naturalist, was mad on ferns. Once, hunting a particular fern on the limestone hills of Fermanagh, he pitched head-first into a deep, dark pothole the size of a prison cell.

Thoroughly dazed, he gazed up at the sky, and there at the rim was a fringe of the fern, the green spleenwort he was trying to find. Before he escaped, balanced on a big rocky boulder, he used his penknife to dig out a clump of it to take home to his garden in Rathgar.

No eco-friendly botanist today would readily dig up something rare to take home, but Praeger does have his heirs in dogged pursuit of the plants of Ireland’s wild places.

Dr Rory Hodd, ecologist graduate of NUI Galway, calls himself a “montivagant”, or a wanderer over hills and mountains. He leads and inspires the “Rough Crew” recruited from members of the Botanical Society of Britain and Ireland (BSBI). This adventurous troupe of young botanists (typically three women and five men) join him in seeking out the plants of the rain-soaked ledges on the high, rocky scarps and ravines of the west.

His particular enthusiasm, however, is for the bryophytes – the mosses and liverworts that are Ireland’s special heritage. In July of last year he led visiting UK bryologists to some old and densely shady oak woodland high up in Killarney National Park and an hour’s trek from the nearest drivable track.

On a small stream cascading down a slope of sandstone boulders, his eye was caught by tiny, bright strands of green at the base of a boulder, in the humid air above the stream. A closer look found thickened fronds up to 5cm long that marked it out from a moss. Some in the group, while equally mystified, were reminded of a family of tropical ferns.

Co Kerry is notable for exotic species escaped into the wild from “big house gardens”. One scenario Dr Hodd considered was that the plant’s spores might have dispersed from a passenger on the trunk of a tree-fern imported from Australasia. But this fern was growing on rocks, some 40 plants in all.

He pressed one frond, its underside lined with reproductive spores, and sent it to an expert at the UK’s Natural History Museum, Dr Fred Rumsey. It was identified as a fern, hitherto unknown in Europe, Stenogrammitis myosuroides. Lacking an English name for it, Dr Rumsey has suggested the Kerry Mousetail Fern, from the meaning of its second species name.

Its natural home is among other Grammitic ferns in the mountain cloud forests of Cuba, Jamaica and the Dominican Republic. And while two extremely rare Grammitic species have reached the Azores in the mid-Atlantic, the tiny spores of S myosuroides appear to have flown the whole 6,000 km, perhaps in the final flurries of a Caribbean hurricane.

It may, indeed, have been lurking unnoticed for thousands of years. Killarney’s soggy oakwoods are vestiges of old native woodland and several of their rarities, notably among the small, filmy ferns, are species whose nearest relatives grow in the cool, misty forests of the Azores, Madeira and the Canary Islands.

One of the best known is the Killarney fern, Trichomanes speciosum, with delicate, finely cut translucent fronds a foot or more long. It seeks out damp, dark situations in the gorges of waterfalls or under overhanging rocks.

It used to be at least “frequent” in the west of Ireland, but in the Victorian fern craze it was uprooted in great quantities to sell to gardeners and tourists. Today it is still a rare and protected plant, growing in scattered, splashy spots from Kerry to Donegal and in Fermanagh.

It seems all too likely that the increasing warmth, rainfall and vagrant storms of climate change will clothe the west of Ireland in even more shades of ferny green. Dr Hodd is worried that many of his favourite rare mountain bryophytes will not adapt quickly enough to survive.

In the meantime, however, he is the discoverer of the most venturesome blow-in from nature ever to take root in Ireland.