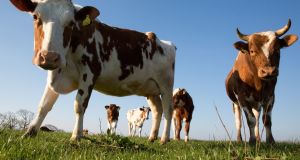 The Commission endorsed use of agricultural wastes in anaerobic digesters to generate biomethane. Photograph: Robert Perry/EPA

The European Union is considering binding standards for natural gas to limit emissions of methane, the second-largest contributor to global warming after carbon dioxide.

The move is also likely to have major implications for Irish agriculture as methane is the main greenhouse gas associated with farming, and accounts for a third of Ireland’s overall emissions.

The 27-member bloc is the world’s biggest importer of gas, and imposing such standards could affect its major suppliers which include Russia and Norway.

Published on Wednesday, the EU methane strategy includes a clearer commitment than previous drafts, which shied away from methane limits on gas consumed in Europe. It said any legislation would follow an impact assessment involving international partners.

“Tackling methane emissions is... essential to reaching our 2030 climate targets and the 2050 climate neutrality goal, as well as contributing to the Commission’s zero-pollution ambition,” the European Commission said.

It strongly endorsed, however, use of agricultural wastes in anaerobic digesters to generate biomethane, as a valid technology to reduce emissions associated with farming.

“The Commission will consider methane emission reduction targets, standards or other incentives for fossil energy consumed and imported in the EU in the absence of significant commitments from international partners,” the policy states.

Methane, which is emitted from leaky oil and gas pipelines and infrastructure, unused coal mines and farming, is 84 times more potent than CO2 in its first 20 years in the atmosphere.

Some campaigners welcomed the push to tackle imported emissions, but Green members in the European Parliament said legislation on agriculture, where most methane emissions come from livestock, needed to strengthened.

The Commission will propose legislation next year requiring oil and gas companies to monitor and report methane emissions and repair leaks. It will also consider banning venting and flaring, which release methane into the atmosphere or deliberately burning it.

Companies including Shell and BP have set voluntary targets to curb methane emissions, and the International Energy Agency says a third of such emissions could be saved at no net cost, as the captured gas could be sold.

EU vice-president for the European green deal Frans Timmermans said: “To become the first climate-neutral continent, the EU will have to cut all greenhouse gases. Methane is the second most powerful greenhouse gas and an important cause of air pollution.

“Our methane strategy ensures emissions cuts in all sectors, especially agriculture, energy and waste. It also creates opportunities for rural areas to produce biogas from waste,” he added.

Commissioner for Energy Kadri Simson said: “We have adopted today our first strategy to tackle methane emissions since 1996. While the energy, agriculture and waste sectors all have a role to play, energy is where emissions can be cut the quickest with least costs. Europe will lead the way, but we cannot do this alone. We need to work with our international partners to address the methane emissions of the energy we import.”

The Commission said it would improve reporting of emissions from agriculture through better data collection, and promote opportunities to reduce emissions with support from the Common Agricultural Policy.

“The main focus will be on best-practice sharing for innovative methane-reducing technologies, animal diets, and breeding management,” it confirmed.

Targeted research on technology, nature-based solutions and dietary shift would also contribute. “Non-recyclable organic human and agricultural waste and residue streams can be utilised to produce biogas, bio-materials and bio-chemicals,” it added.

This could generate additional revenue streams in rural areas and avoid methane emissions at the same time. “The collection of these waste products will therefore be further incentivised,” it said.

In the waste sector, the Commission will consider further action to improve management of landfill gas, harnessing its potential for energy use while reducing emissions. – Additional reporting – Reuters