How can a blackbird be white? It’s actually not that uncommon

Blackbirds topped the list of a British ‘abnormal plumage’ survey, at over 40% 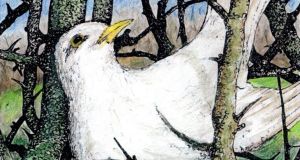 There are one or two causes for it, but the late-summer disappearance of our garden birds dismayed me more than usual.

Apples on topmost branches were left waiting for their usual blackbird excavation, and the elder tree was drooping with untouched fruit. Our first flycatchers had long vanished and the swallows left far too early, finding midges scarce in the sky. At September’s end I watched a blue tit moving busily between the bells of fuchsia, plumbing each for nectar. Was it missing its quota of spiders and flies or just indulging its notorious sweet tooth in any month of the year?

“Where have all the birds gone?” is a familiar seasonal query to Eye on Nature. It comes often from readers unfamiliar with the nesting birds’ need to moult well-worn feathers once the hard work of breeding and feeding is done.

Wing-feathers are best changed in hiding and in keeping mum for weeks. And many of their young no longer hang about hopefully, but fly off to hedgerows new. Then there are days of stillness and silence, except for the whisper of the sea.

What I missed most were the sight and sound of blackbirds, their special screech of alarm at my passage down the garden path.

Once their young stop bothering them, adult blackbirds change all their feathers, starting as early as July. Their offspring change their fledgling feathers too, their donning of long trousers beginning with the body and wings and ending with the head. This lasts about five weeks and the slow changes on the head can leave the young birds looking ragged and bare in late summer.

It was only in the last days of September that I noticed blackbirds at all – a couple furtively on the move through the fuchsia bush outside my study window. And next day there was a fine glossy male on the path, clearly restored from his lockdown.

What of the bright, white blackbird in my painting, conjured from a sighting more than 30 years ago? Tipped off by a friendly folklorist and racing on my bike, I duly located the changeling along a boreen near the sea.

It was hiding, if that’s the word, in a sombre winter hawthorn, where its pallor played unexpected tricks with size and shape. As one might be thrown, say, at the sight of a scarlet seagull, the bird’s blazing whiteness, its silky gleam in the low winter sun, seemed to demand some exotic explanation. But the fan of its tail and its “chink” of alarm was pure blackbird.

I was, of course, many thousands from the first to marvel at a snowy blackbird, Pliny told of them shown in Rome. And in the weighty Birds of Ireland of 1900, Richard Ussher wrote of having seen “a pure white specimen” in his forestry plantations and noted that “white and pied examples of this bird are particularly frequent.”

Pied blackbirds, patched with white, are indeed quite regularly reported to Eye on Nature. And in the UK, in 2011, the British Trust for Ornithology launched an “abnormal plumage” survey, inviting responses from the watchers of garden birds.

After nearly 3,000 records, this witness to weirdness embraced 58 different species, a remarkable total even allowing for Britain’s greater range of garden birds. Blackbirds topped the list, at more than 40 per cent. House sparrows came next, followed by jackdaw and carrion crow.

All these dark birds were marked with strange white feathers, but other species included a chaffinch with a green crown, a siskin with slate-grey wings and a primrose-yellow blue tit.

What white-patched dark birds have in common is a local lack of cells producing melanin, the pigment of black and brown feathers. This marks them as “leucistic”, a heritable condition. More than three-quarters of the garden sightings were of leucistic birds, including an all-white dunnock.

Particularly common in blackbirds is a kind of acquired leucism the British trust calls “progressive greying”, in which the bird’s white feathers increase with every moult. So my blackbird in the hawthorn could have survived a few winters of Mayo’s whistling gales.

Albinism, a genetic mutation, turns the whole bird white (there’s no such thing as a “partial albino”) unless it has some carotene, the pigment of reds and yellows, in its normal plumage. An albino adult goldfinch, the British trust suggests, would still have its red face and gold wing bars. And my leucistic white cock blackbird, with an adequate carotene quota, had kept his yellow bill.

Albinism leaves the eyes pink, their blood visible through colourless tissue (a white blackbird with dark eyes is leucistic).

Most albino birds die soon after fledging. Not only are they conspicuous, but, through poor eyesight, they don’t see the sparrowhawk first.