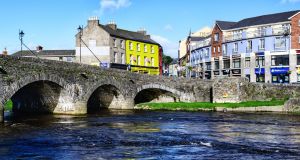 A UCC professor has warned that Enniscorthy in Co Wexford is becoming the New Delhi of Ireland due to high levels of air pollution. File photograph: Getty Images.

Enniscorthy in Co Wexford is fast becoming the “New Delhi of Ireland” due to the high levels of pollution in the town’s air, a professor from University College Cork has said.

Speaking following the publication of data which shows air pollution across Ireland is rapidly increasing, Prof John Sodeau called on the Government to introduce a nationwide ban on smoky coal as soon as possible.

He said the Moneypoint power station in Co Clare, which generates more than 20 per cent of the electricity in Ireland each year and sources nearly all its coal from Colombia, must also close.

“It is not true to say we need more research done in assessing sources. In Ireland burning coal of all types, wood and peat add large amounts of particulate to the air,” he said.

“The health of Irish citizens and climate change come first, not legal niceties. The data from Enniscorthy is irrefutable. It is rapidly becoming the New Delhi of Ireland.”

The World Health Organisation has previously described the air quality in New Delhi, the capital of India, as the worst of any major city in the world.

The latest data from the Environmental Protection Agency (EPA) shows 84 air pollution breaches were recorded at monitoring stations across the State in the first five months of this year compared with 17 in the whole of last year.

There are currently 42 monitoring stations recording the levels of fine dust particles, or PM10 particulate matter, in Ireland’s air. These fine particles come from many sources including exhaust emissions, soil and road surfaces, construction work and industrial emissions.

The PM10 daily limit of 50ug.m3 is considered breached if there are more than 35 breaches at one location in a calendar year. It is understood there have been 12 breaches in Enniscorthy so far this year compared to two in all of last year, while air pollution levels in the town are 10 times over the EU limit.

Describing the ongoing climate emergency as “World War III”, Prof Sodeau called on people to adapt a mindset more in line with a wartime setting where they would accept “big lifestyle changes” such as paying additional taxes, driving electric cars and not buring coal to protect the nation’s health and ecosystem.

The Government’s national ban on harmful smoky coal, which was scheduled to be introduced this September, was pushed back in April with no indication of when it will now come into force.

It is understood the Department of Climate Action and Environment had been under sustained pressure from coal importers with a number of firms threatening legal action if the ban went ahead.

Dust levels are particularly high during the winter months when people’s use of solid fuels such as coal, peat and wood impacts on air quality and on health, especially in small towns and villages.

Green Party MEP for Dublin Ciarán Cuffe criticised the EPA for the layout of its air pollution data saying it was “a mess to navigate” and did not explain what was causing the pollution.

He added that limited monitoring was concentrated in affluent areas, warning that the last quality air monitor in Dublin’s north inner city had closed last year.

“In the short-term I want the EPA to tell us more about the contributors to poor air quality. Is it industrial pollution coming from Europe, or is it emissions from traffic, home heating systems or cruise ships in Dublin Port? The public deserves to know.”