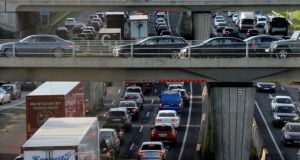 A total of 1,500 premature deaths in Ireland are directly attributable each year to poor air quality. Photograph: Alan Betson

The high volume of traffic on Irish roads combined with the spread of polluted European air masses is creating a “major environmental health issue” in Ireland with air contamination rapidly on the increase, the Environmental Protection Agency (EPA) has warned.

Speaking on Monday following the release of data which shows pollution safety levels across Ireland have been breached numerous times so far this year, EPA air quality manager Patrick Kenny warned of the increased presence of fine dust particles in Irish air. These particles, he said, are so tiny that people can breathe them deeply into their lungs which in turn can lead to pulmonary and respiratory issues.

This PM10 particulate matter (dust) comes from many different places including exhaust emissions, soil and road surfaces, construction works and industrial emission, according to the EPA.

The Pm10 daily limit of 50ug/m3 is considered breached if there are more than 35 breaches at one location in a calendar year. Data released by the authority under FOI to the Times Ireland edition shows 12 out of 19 stations recorded more air quality breaches in the first five months of the year than in the whole of 2018.

Most of these breaches were recorded in Dublin with 14 between January and May 2019 at the Davitt Road air quality station in Dublin 12 compared with only one in 2018. There were 12 breaches in Ringsend compared to three last year and eight breaches at Ballyfermot which recorded none last year.

The rise in air pollution breaches can, in part, be explained by the recent increase in monitoring stations across the State, according to Mr Kenny. There are currently 42 air monitoring stations across Ireland, up from 19 in 2017. However, the rising level of PM10 has become a “major environmental health issue” along with air pollution through “transboundary” gas emissions which travel from central and western Europe across Ireland.

This polluted air mass was particularly notable over April’s Easter weekend, added Mr Kenny. “We’ve had weather conditions which have led to higher levels of pollutants in our air,” he told RTÉ’S News at One programme. “We’ve had more still air and we’ve had dryer weather conditions which is good for other reasons but can have a negative impact on air quality. Equally, traffic volumes in Dublin do clearly contribute to the pollutants.”

A total of 1,500 premature deaths in Ireland are directly attributable each year to poor air quality caused by solid fuel burning, the EPA warned late last year. It also underlined the level of dust in Irish air as a “growing concern”. These levels are particularly high during the winter months when people’s use of solid fuels such as coal, peat and wood impacts on air quality and on health, especially in small towns and villages.

The burning of solid fuel - including ‘back yard burning’ and emissions from transport remain the main threats to good air quality in Ireland, according to the EPA’s 2017 air quality report released last November. The Department of Communications, Climate Action and Environment is currently developing the State’s first National Clean Air Strategy which is to provide a framework on how to reduce harmful emissions and improve air quality and public health.

A spokeswoman for the EPA said the EU must urgently adopt “stricter guidelines, especially for particulates” so that legal and enforceable standards can help improve air quality. “The choices that each of us makes about how we heat our homes and travel to work and school can directly impact on our local air quality, the public need to be supported in making clean heating and transport choices,” she said.