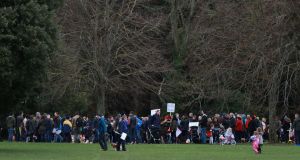 A fresh application to build more than 500 homes on playing pitches beside St Anne’s Park in Raheny, north Dublin has been submitted to An Bord Pleanála, eight months after a similar scheme was rejected by the board.

The board had initially, in April of last year, granted permission for 104 houses and 432 apartments on the St Paul’s College site to Crekav Trading, a subsidiary of developer Pat Crean’s Marlet Property Group, but that decision was the subject of a High Court challenge.

The action taken by Clonres CLG, representing residents from the Clontarf area, and two environmentalists, was the first challenge to a decision made under the State’s new “fast-track” planning system where large-scale housing applications are determined directly by the board, not local authorities.

Last July, the High Court said the application should be returned to the board to allow it to reconsider matters and make a fresh order on the planning application.

Crevkav has taken judicial review proceedings against the board’s decision, which are ongoing, but it has decided to make a fresh application regardless.

A spokesman for the company said the new application addresses the concerns raised in relation to the Brent geese, but otherwise remained substantially the same as the application previously lodged with the board.

Mr Crean last January said it was a “stark and tragic” irony that homeless people were sleeping in St Anne’s Park , next to his site.

Local Independent councillor Damian O’Farrell said he would making a submission to the board seeking that it refuse the development. “My position remains the same, these lands should be retained as park lands and for sports and recreation use.”

Labour councillor Jane Horgan-Jones said the development was not suitable on lands that were essential “green lungs” for the city. She added that it was “unusual” the company would not await the judgment of the High Court on their previous application before submitting a new one.

Crekav said the board had already ruled that the land was zoned for housing and that the development was of an appropriate density.