At St Clare’s in Harold’s Cross, scooting to school and composting get seal of approval

Schoolchildren at St Clare’s Primary School in Harold’s Cross, which has been participating in the Green Schools initiative for 20 years, talk about climate change and plastic pollution. Video: Kathleen Harris 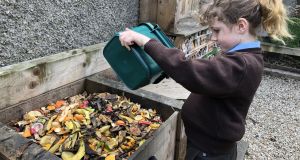 If eight-year-old Ruth Labanyi was minister for the environment, she would destroy all plastic factories and clean up the oceans.

The science is behind her, she explains.

“Those plastic bottles are doing a huge bit of damage because they break down into tiny particles and then we eat the fish and we can get really sick.”

Furthermore, she says it takes “thousands of years to break down plastic, and we’ve made enough already”.

Ruth is a second-class student at St Clare’s Primary School in Harold’s Cross, which has been participating in the Green Schools initiative for 20 years.

When St Clare’s first signed up, the focus was on recycling, says deputy principal and Green Schools co-ordinator Kate Liston. As the issue of climate change has grown to crisis status, the remit of the programme has expanded to look at cutting down on plastic consumption, eliminating food waste, reducing car journeys and even tracing the air miles of clothing.

“Children are unbelievably impressionable and are a really captive audience for the environmental message,” says Liston. “When they realise our actions are impacting on other people, but also animal and plant life, it really gets their attention and makes them want to make a change.”

Dylan McGovern (12) says he has noticed “a lot of awareness” about climate issues.

If he was old enough to vote he “probably would go for the Green Party over, say, Fine Gael or Fianna Fáil, ” he says.

Reduction is key, as “even recycling takes fuel”.

The school has an “outdoor classroom” where wildflowers have been planted to entice bees and butterflies into the grounds. A vegetable patch is overgrown with rhubarb that the children are allowed to bring home, says Liston. In the corner of the garden is a large chest, filled with lunch leftovers and staff teabags for composting.

Eight-year-old Devlin O’Brien is particularly concerned about plants and wildlife. “Bees have been dropping like flies,” he says. If only people would grow more trees, vegetables and flowers, it would “make a lot of things better” for the bees, he says.

St Clare’s environmental theme for this year, set by the Green Schools programme, is transport. “The children are putting pressure on their parents to change their transport. Many of them live locally, so it is doable,” says Liston. “Adults are aware that burning fossil fuels is having an impact ... If their child is putting pressure on them it adds another layer of guilt, so they might make more of an effort to choose wisely.”

Wednesday is a big day for clean commuting to St Clare’s. Wowday, Sowday and Cowday were established to encourage children and parents to walk, scoot or cycle to school midweek.

Third-class pupil Ailbhe O’Doherty scoots in every day. On Wednesdays, she joins the school’s weekly “scooter train”, where children can “hop on” at Harold’s Cross Park and commute in a high-vis procession.

“It’s great because lots of younger kids don’t really want to walk. On the scooter train it’s way funner because they can talk to their friends and it’s also not polluting like the car,” says Ailbhe.

Isabel Kelly (12) monitored air pollution around the school using Vaseline-d milk cartons. Her findings were just as she predicted, she says. “It would be a lot better if you could walk or cycle or scoot. Or even public transport is better. You don’t let off any fossil fuels if you are walking.”

Climate change is “kind of scary”, she says, “It’s as if we have all made this happen ourselves. All these things we thought were great, like cars, it could all backfire on us.”

Nine-year-old twins Evie and Freya Chilton believe children and teenagers, like the Swedish climate activist Greta Thunberg (16), can make a difference. Freya describes joining a climate march, where she made posters and “stood and shouted” for climate change.

“It’s our planet so we need to care for it,” she says. “Lots of teenagers are doing it because they are the next generation, and they are asking for their world to be better instead of being bad.”

While some adults are helping to curb global warming, they should be doing more, says Evie. Climate change will “affect the younger people more because they will live longer, probably,” she continues.

It is difficult for children to spread awareness because they “are not in a position of power”, says Sean Morris (12). “It’s good that adults are helping other adults come to their senses,” he adds. He has heard some things about global warming that have given him “chills” and “goosebumps”, he says. “I read somewhere, and also someone else told me this, that climate change will be irreversible in 12 years.” He adds: “I don’t know if that’s true or not, but that was very scary to read.”