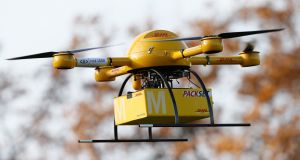 The company is due to seek regulatory approval to begin using its drones soon having been testing the technology for some time. File photograph: Getty Images

An Irish company preparing to roll out drone deliveries of fast food has said the wildlife lobby should not be underestimated as a potential impediment to the sector’s development.

Bobby Healy, chief executive of Manna which hopes to “go live” with deliveries later this year said while the vast majority of people would welcome the service there are concerns around job losses, privacy and the environment.

“Don’t underestimate wildlife and the wildlife lobby as a very big impediment to us progressing with the drone industry,” he said. “You only have to ask the wind farm owner anywhere in Ireland about the birds that fly into their turbines to see how powerful the conservation lobby is.”

Mr Healy was addressing the Drone Symposium in Dublin, an event run by the Irish Aviation Authority (IAA) and the Department of Transport examining the sector’s future, particularly in light of new EU regulations due to begin coming into force later this summer.

Manna, based at University College Dublin’s Nova innovation centre, recently raised finance for what Mr Healy describes as a “concrete and plausible” plan for a major Irish technology venture. It is due to seek regulatory approval to begin using its drones soon having been testing the technology for some time.

A video screened at the conference showed fast food being attached to the bottom of a drone, carried over a short distance and lowered by thread to an awaiting customer in their back garden.

However, despite confidence in their ability to deliver, Mr Healy said there were several concerns that required attention, including environmental issues.

An anticipated launch of Alphabet’s drone food deliveries in Helsinki next month would spark substantial public debate on the technology’s application, he said.

Meanwhile, in the aftermath of major drone disruption at airports in the UK and Ireland, Richard Rose, the UK’s head of domestic aviation security, said “snake oil salesmen” had attempted to sell anti-drone technological solutions in both countries.

“Perpetrators are showing an increased interest and a demonstrated willingness to use this disruption method,” he said, adding that mitigation could not keep pace with technology.

Airport security experts told the conference there was no easy solution but that response protocols were under constant development.

Nathan Wall, safety and training manager at Cork Airport, said that in the aftermath of two drone security breaches in 2017, 16 separate companies attempted to sell them inadequate protective systems. “There is no silver bullet, it’s as simple as that,” he said.