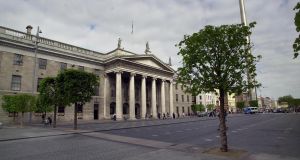 The O’Connell Street Revival Society says illuminating the Spire and the O’Connell and Parnell monuments could be achieved at an annual cost of about €300,000. Photograph: Bryan O’Brien

The illumination of the Spire, the installation of public seating and the erection of sentry boxes at the GPO, have been proposed by a new civic organisation seeking to revitalise Dublin’s main thoroughfare.

The O’Connell Street Revival Society wants to “halt the downward trajectory of the street” through the implementation of what it says are low-cost achievable measures that could “change the dynamic” of Ireland’s main street.

The group, formed by inner city residents Sinead Connolly, John Seery, Michael Duffy and Sinead O’Dwyer, has produced a report based on proposals made by members of the society and the public.

The 12 Steps to Revive the Street report, which will be presented to Dublin city councillors next month, proposes the illumination of the Spire at night, which it says is “barely visible” despite being officially called the Monument of Light. “Major monuments in other European capitals have a lighting programme which attracts visitors and locals to enjoy these public spectacles.”

Illuminating the Spire and the O’Connell and Parnell monuments could be achieved at an annual cost of about €300,000, it said. Public seating could also encourage people to linger on the street, with 50 benches costing approximately €100,000.

At the GPO, it proposes installing two sentry boxes, similar to those used at Buckingham Palace or the Vittorio Emanuele II monument in Rome. These could be manned by “uniformed gardaí or ceremonial soldiers” which would work “simultaneously as a tourist attraction and as a highly visible permanent and comforting security presence on the street”.

Lord Mayor Nial Ring welcomed the report, which he said would “help stimulate debate on what changes are needed to bring the street forward as the social, economic and cultural heart of Dublin”.

“€40 million was spent in the late 1990s and while that did improve the footpaths, and the plaza at the GPO and the Spire were put in, it didn’t change the narrative of the street. And now 25 per cent of the street is either closed down, vacant or derelict,” said Mr Seery.