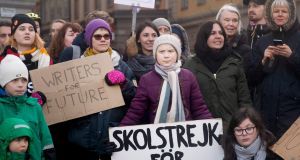 Adults are not in control of the global response to climate change, and this has led to widespread protests by young people throughout the world, according to the historian and energy expert Dr Simon Pirani.

Speaking in Dublin on Monday, he criticised the failures of the global response under the UN climate talks process. He said this sent a subliminal message to the population at large, “don’t worry; the politicians are meeting, the NGOs will pick them up, if they are not doing the right thing”.

“The adults are not in control. They are not solving the problem, and school pupils have understood it. That is why they are out protesting,” he added, in a reference to school protests spreading across the globe following a strike by Swedish teenager Greta Thunberg.

Relying on the markets approach and emissions trading mechanisms had not worked, while the fossil fuels sector continued to be subsidised for hundreds of billions every year, he said.

Scientists had provided clear evidence since the 1980s of a warming world, yet fossil fuel consumption was allowed increase by two-thirds since, said Dr Pirani, a research fellow at the Oxford Institute for Energy Studies.

Stop thinking about the thing as ‘how do we get around in these metal moving armchairs?’

The US car industry since the 1970s was the great example of failure of regulation in constraining inefficient energy practices, he believed. It was typified in the proliferation of the SUV. This was not “an anti-American rant”, as this then also happened in other parts of the world, Dr Pirani said.

“The political conclusion from that is that the transition from fossil fuels means moving away from car-based urban transport systems. Stop thinking about the thing as ‘how do we get around in these metal moving armchairs?’ Maybe there is a different way of getting around, as they do in Amsterdam,” he told the seminar hosted by Sinn Féin MEP Lynn Boylan.

Given electric vehicles might not achieve the reductions in greenhouse gases needed, “re-making cities and the way we live in them” was required, Dr Pirani said.

Prof Barry McMullin of DCU said that while Greta Thunberg had identified the simple solution, “we have to stop our emissions of greenhouse gases”, this did not mean it was going to be easy.

Nuclear power was not a realistic short-term solution, while using fossil fuels with carbon capture and storage had been shown to work at scale, but it was expensive and a difficult engineering task, the engineer told the conference. Going big on wind in the Irish context, especially offshore, was justifiable but, with electricity generation, there was a “use it or lose it” issue.

Prof McMullin said he did not believe decarbonisation was going to happen in Ireland quickly enough. “If you are looking for hope, don’t come to me. It’s not a particularly useful emotion.” He preferred to concentrate on understanding the climate problem and addressing it with courage.