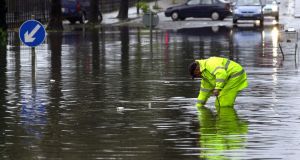 The number of days with heavy rainfall and the number of extreme flooding events has risen in the past decade. Photograph: Eric Luke Staff

Local authorities in Dublin have jointly unveiled extensive climate action plans, which include a move to reduce carbon emissions by 40 per cent by 2030 – a more ambitious target than that being pursued by the State.

Each of the four councils, which make up the most populated region in State, have set out the actions to reduce greenhouse gas emissions in their buildings and operations and to improve energy efficiency, while making the Dublin region better able to adapt to the detrimental effects of climate change.

The Draft Climate Change Action Plans 2019-2024, which were drawn up with Codema Energy Agency, show the effects of climate change “are already impacting Dublin at a significant rate and are very likely to increase in their frequency and intensity”.

Dublin Bay’s average sea level “appears to be rising faster than initially forecast and has risen by twice the global average in the past 20 years”, while the number of days with heavy rainfall and the number of extreme flooding events has risen in the past decade.

Estimated sea level rises to the year 2100 are to be factored in for new tidal coastal defences, while all new river flood defences will incorporate an allowance for “increased river peak flows” due to climate change – now estimated at 20-30 per cent to the end of the century depending on river catchment.

A series of public meetings is being rolled out from this week that will give people the chance to learn how climate change and carbon emissions continue to affect Dublin, and how each council plans to respond.

A public consultation process on the plans – which focus on energy and buildings; transport, flood resilience, nature-based solutions and resource management – will run until March 25th.

The main overall targets are:

– 40 per cent reduction in the councils’ greenhouse gas emissions by 2030;
– 33 per cent improvement in energy efficiency by 2020;
– To make Dublin a climate-resilient region by reducing impacts of future climate change-related events;
– To engage and inform citizens on climate change.

The councils have also listed specific climate actions they pursue in their areas. Dublin City Council, for example, has committed to completing the State’s largest district heating system using excess heat generated by industry, including the large municipal waste incinerator at Poolbeg.

The councils are already on the way to achieving the 33 per cent energy target, said Suzanne Fitzpatrick of Codema, while progress on emissions targets was “making good headway”. All the authorities have signed up to the Covenant of Mayors Climate Initiative in place across Europe, she said; this is a series of voluntary targets for cities and towns to scale up ambition on climate mitigation and adaptation.

On the €40 million Dublin District Heating System, Victor Coe of Dublin City Council’s Environment and Transportation Department said it would capture waste heat and pipe it into homes and businesses in the Poolbeg, Ringsend and Docklands areas. “This project has the potential to save 48,000 tonnes of carbon-dioxide per year, equivalent to 5 per cent of Dublin City’s total CO2 from heat.”

Co-chair of Dublin City Council’s climate sub-committee Cllr Claire Byrne (Green Party) said the last climate plan for the city had not been reviewed or updated since 2009, but action plans for all four Dublin local authorities were now in place. Civic engagement would be key to the success of the plans “and to make sure our city is climate ready”.

“We pushed for a high level of public consultation,” she added. She encouraged members of the public to come to meetings, to view the plan on dublinclimatechange.ie and to make a submission. “All our futures and our children’s futures depend on it making sure this plans works.”

As part of the consultation process for Dublin region climate plans, public information events will take place at the following venues:

In addition to committing to targets on reducing carbon emissions and increasing energy efficiency, individual councils have made commitments including the following:

Dublin City Council:
– Develop Dublin District Heating System in the docklands, with potential to deliver low-carbon heat to up to 50,000 homes;
– Create a smart mobility hub in the council’s civic offices, with staff access to bicycles, e-bikes and electric vehicles;
– Develop a coastal zone management plan for Dublin Bay;
– Further develop of the Dodder Greenway;
– Map and tag city bins.

Details on how to make a submission and to read the draft climate change action Plans are available at dublinclimatechange.ie