When was the last time you had to clean your windscreen during the summer months? 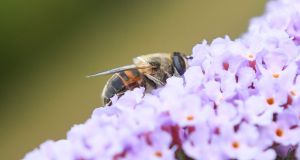 Bees spend their entire lives feeding on nectar and pollen while helping to fertilise plants. In Ireland there are 100 species of bee; 50% are in decline, a third are threatened with extinction, Photograph: Getty Images

The evidence is stacking up side by side with confirmation of human-induced global warming: we are living in the sixth age of mass extinction. The combination of species decline and a warming world means the Earth is careering towards a catastrophic collapse of ecosystems.

This week a global study showed the decline of insects is accelerating at 2.5 per cent a year, suggesting they could vanish within a century. It is rare that a scientific paper is so blunt: “Unless we change our ways of producing food insects as a whole will go down the path of extinction in a few decades.”

In this instance the analysis concludes that intensive agriculture is the main driver of declines, notably heavy use of pesticides, while urbanisation and climate change are big contributing factors.

Insect loss means birds, reptiles, amphibians and fish starve as they miss out on vital food sources, while soil is not fertilised and aerated naturally, a process that is critical to all plant life.

Bees have a particular task in that regard, says Prof Stout, as they spend their entire lives feeding on nectar and pollen while helping to fertilise plants. In Ireland there are 100 species of bee; 50 per cent are in decline, a third are threatened with extinction.

And yet Irish people display an ominous disconnect between perception of risk and what could soon be existential threats in the form of extinction and climate breakdown. The gap is widest on biodiversity, according to Irish wildlife scientists increasingly confronted by its deterioration.

Ireland’s first National Biodiversity Conference is being held in Dublin Castle next week in an attempt to counter belief that species decline is a phenomenon elsewhere; within the Amazon’s depleting rainforests, on the giant factory farms of the US midwest or among dying coral reefs off Australia.

It will look at decline on our doorstep, and seek to identify actions to avoid a fate no Irish person can avoid based on current trajectories.

National Parks & Wildlife Service (NPWS) scientist Dr Deirdre Lynn is Ireland’s representative under the UN Convention on Biological Diversity. In the same way Irish biodiversity is not gone into, she says the convention “does not get talked about until there is some catastrophe”.

“We need to talk about it more because we rely on nature for everything,” she insists.

So the conference is an attempt to begin a big conversation, to get all players together to talk about nature, to reach all sectors and wider society and, especially, to consider solutions and commitments, adds Lynn, who is also chief architect of the National Biodiversity Plan.

The Department of Culture, Heritage and the Gaeltacht (her employer) does not own biodiversity nor is it a landowner, she points out, so opening dialogue is essential, especially with the agriculture sector, “to ensure we consider nature in talking about ‘progress’.”

That should include where we are going as a society in the context of climate change; changing farming practices and demographic trends.

Critically, degradation of Irish grasslands and peatlands, once home to many unique species, needs to be addressed, Lynn says, and the “economic value of nature” factored into accounting, and combined with a long-term view on impact especially when a sector is expanding.

Disconnect, she adds, has been evident when going down the intensification route without thinking of consequences.

She despairs about the poor state of biodiversity in Ireland, but believes “things are slowly changing”, helped by innovative EU programmes and a change in agriculture policy trickling down to national policy; all helping to build bridges.

The climate agenda is “massively raised” and tangible in pubic consciousness – “but I don’t think people see the connection between habitats and climate change”.

If habitats are degraded, climate effects are exacerbated. And yet at the end of the day people love nature, she says. “I don’t think you will hear people say, ‘I really enjoyed that species going extinct’.”

She is acutely conscious of the decline of insects; manifest in no longer having to clean her windscreen when driving during summer months. “And we are causing their decline. It’s very tragic.”

But she does not want nature to be catastrophised and the response to species decline to be driven by headlines. “We should be talking about it all the time.”

The verdict of Pádraic Fogarty of the Irish Wildlife Trust (IWT) is unequivocal: “It’s widely believed we are in the midst of a mass extinction event which is leading to the collapse of ecosystems, and which has very uncertain consequences for us all. This has affected Ireland as much as any other country.”

Compounding matters, conservation measures over the past 30 years have been “a colossal failure”, especially in protecting globally-important peatlands.

“This has left us with serious challenges in meeting legally-binding commitments on climate change, water quality and nature preservation. But more important than that, it’s a tragic loss of heritage that today we cannot show our children what a healthy bog looks like. It is a legacy that few will thank us for,” says the IWT’s campaign officer.

“It is no exaggeration to say that the raised bogs of the midlands are practically extinct...while no raised bog has survived intact.”

He says the vast blanket bogs of the west and upland areas have fared little better – only 28 per cent are deemed to be “worthy of conservation”. The remaining 72 per cent have been drained for agriculture, turf extraction or are buried underneath a carpet of plantation conifers.

With habitat degradation comes extinction. BirdWatch Ireland had 10 birds that are characteristic of peatlands on their “red list”, meaning they have suffered catastrophic declines in population or breeding range, namely the golden eagle, red grouse, golden plover, dunlin, curlew, twite, whinchat, nightjar, meadow pipit and ring ouzel. The skylark, hen harrier and short-eared owl are on its “amber list”.

“Wind turbines are being inappropriately erected on peatlands where their contribution to climate goals is likely to be less than the greenhouse gases being released by the degrading peat, while at the same time harming water quality and aquatic life downstream.”

Fogarty outlines shortcomings in spite of commitments by State agencies, though he acknowledges where progress is being made by the NPWS and Bord na Móna, including good projects with strong community buy-in.

He cites, however, continuing use of “sausage machines” to produce turf, and extensive dumping, including builders’ rubble, dead animals and asbestos.

“What hope for nature if we can’t even protect these precious places? Clearly, we need a radical change in our relationship with the natural world.”

He says farmers living in sensitive areas should receive payment when they help preserve land for the benefit of others. But lack of consultation with communities, a dearth of political leadership and inadequate funding for conservation is taking a huge toll.

“Fixing these important ecosystems can help us to clean our water, lock up carbon, regulate flooding, stimulate local economies and restore wildlife populations.”

The All-Ireland Pollinator Plan is arguably the biggest cross-sector initiative ever undertaken to arrest Irish biodiversity loss. After three years, 94 per cent of its actions are under way or completed. “The buy-in has been extraordinary,” Stout adds – but its impact has been hard to tell, especially as Ireland does not have a national insect monitoring programme.

There is no evidence of improvement on the ground yet. Meanwhile, worrying levels of species in decline and habitats under threat across the Irish landscape are all too clear. “We don’t see things getting better yet.”

The international picture is one of accelerating loss. The Intergovernmental Science-Policy Platform on Biodiversity and Ecosystem Services warned last year that 66 per cent of European habitats had “unfavourable conservation status”, and may become worse under a “business-as-usual scenario”.

Countries’ persistent failure in honouring undertakings and lack of success in halting biodiversity loss has reached the stage that the world needs a “Paris [agreement] moment”, that is a commitment equivalent to the 2015 landmark pact on climate change, European Environment Agency director Dr Hans Bruyninckx told a climate change conference in DCU last week.

“If we don’t fix this we will be part of the next 40 per cent of species that go,” he predicted.

In contrast, Fogarty favours implementation of existing agreements which, if fully adopted, would add up to “making great progress”.

The experience of going before the Oireachtas Committee on Culture, Heritage and the Gaeltacht recently was crushing, in contrast to hope felt when invited to address it on Irish peatlands.

He admits his message was blunt but stresses it was driven by the belief “Irish habitats are restorable”.

“I had expected the NPWS to be challenged on why so many of the promises in the National Peatlands Strategy were not being fulfilled. If our peatlands are so critical [as the chairman of the committee has proclaimed] why didn’t he bother to turn up?

“Why is the Fine Gael Government so quick to de-designate previously protected areas or furtively remove the need for planning permission for industrial peat extraction but stubbornly reluctant to implement conservation promises?

“As we struggle to address climate change and other environmental challenges where is the vision for restoring peatlands to all their glory? Who exactly is holding Minister [Josepha] Madigan to account?”

In the end there was no discussion on how best to preserve and protect these habitats for irreplaceable flora and fauna. State agencies should have been grilled but sailed through unchallenged, he says.

“Far from ‘shadowing’ the Minister and her department, this committee, it seemed to me, is in the dark. As our bogs take their last gasps few in the Oireachtas, it would appear, is prepared to fight to save what’s left.”