The six steps urgently needed to save Irish biodiversity 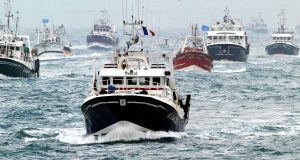 At least 50 per cent of Ireland’s offshore waters should be designated as marine conservation areas where fishing would be prohibited. Photograph: Reuters

The Living Planet Report 2018 reported that there has been an astonishingly steep fall of 60 per cent in biodiversity across the globe over the last 40 years. More than 50 experts from academia, policy, international development and conservation organisation have contributed to the report, so it has credibility.

A recent review of research findings from across the world predicted that we would lose an alarming 40 per cent of insect species over the next 30 years. As a small island off the west coast of Europe, Ireland is not immune from these trends. Of the 3,000 species that have undergone a red-list conservation assessment, one in every four species is threatened with extinction here. This includes the European eel, Atlantic salmon, curlew, freshwater pearl mussel, angel shark and many more. This is a truly shocking legacy that we are handing on to future generations.

The Living Planet Report 2018 concludes: “we are the first generation that has a clear picture of the value of nature and the enormous impact we have on it. We may also be the last generation that can act to reverse this trend”. Sobering words indeed.

Ireland’s semi-natural habitats are so fragmented that, as a matter of urgency, the last remaining must be afforded statutory protection

The evidence is now clear – biodiversity across the globe is being destroyed at an alarming rate. Biodiversity loss is not just about the loss of species, but also the services that nature provides, which we often take for granted. These servives include water purification, productive soils, climate regulation, carbon sequestration, pollination, pest control and many others, all of which bring enormous benefits to Irish society and the economy.

If current trends continue, systems will collapse, causing dramatic disruption to sectors such as agriculture and forestry, and damage to our physical and mental well-being. Radical action is needed to maintain our natural resources.

A great deal has been written about biodiversity loss, yet there is a dearth of practical solutions on how we can change the trajectory that Ireland is on. The adoption of just six key policies by Government could radically alter public policy for biodiversity and mitigate the worst impacts of climate change.

2. Designate and conserve a network of sites of national, regional and local importance for nature conservation, supported by programmes and financial incentives to promote positive land management within these sites. Ireland’s semi-natural habitats are so fragmented that, as a matter of urgency, the last remaining fragments of importance at the national, regional and local level must be afforded statutory protection.

3. All farms in receipt of CAP payments and other subsidies should have a minimum of 20 per cent of their land area actively promoting biodiversity enhancement measures. Aligning farming policy with climate and biodiversity policy is a huge challenge. Recognising and rewarding farmers for positive management of farmland features, including hedgerows, field margins, areas of semi-natural habitats, stream, ponds, etc, would be a very significant step in the right direction.

4. Transition to a forestry programme based solely on native broadleaved species. Forest policy needs to transition to a model based on continuous cover native woodland, thereby increasing the value of woodlands as carbon sinks, phasing out clear-felling of non-native trees on upland peatlands and promoting the planting of Irish species on more appropriate land.

5. Transfer ownership of all publicly owned peatlands to a new agency established solely to manage them for their natural capital benefits. In addition to being of inordinate biodiversity value, peatlands are Ireland’s most important long-term stores of carbon. All peatlands in public ownership should be transferred to a new state body, Natural Capital Ireland, to safeguard their value as a long-term natural capital resource.

The identification of these policies is predicated on taking a long-term rather than a short-term view of land use and resource management. Their implementation will need leadership, but if they were implemented it would move Ireland towards becoming a leader in resource management; ensure Ireland’s natural resources could survive some of the more harmful impacts of climate change; and provide the conditions necessary for the conservation of biological diversity.

1 Donald Trump’s political success is based on racism
2 Why you still can’t have European holiday this summer. Or can you?
3 The night shift: ‘In 38 years, I’d never seen an owl in the city centre’
4 Oliver Callan: ‘I was a perfect candidate for exploitation’
5 Ireland earns ‘right to be hopeful’ again as Government fast-tracks plans to reopen country
Real news has value SUBSCRIBE