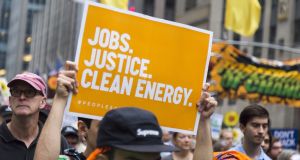 A report by Cambridge Econometrics and Eurofound’s European Jobs Monitor concludes implementing the Paris Climate Change agreement will result in 1.1 per cent growth in GDP and 0.5 per cent growth in employment. Photograph: iStock

Fully implementing the Paris Agreement on climate change would boost job creation and economic growth in the EU, according to a report published on Tuesday.

The analysis was conducted by Cambridge Econometrics and Eurofound’s European Jobs Monitor – an EU agency based in Dublin which evaluates working and living conditions in member states.

The positive outcome for the EU as a whole is mainly attributable to the investment activity required to achieve such a transition, together with the impact of lower spending on importing fossil fuels.

Eurofound chief researcher Donald Storrie said: “Climate change is expected to have very serious implications for living and working conditions on a global scale; it is the people who are socially, economically, or otherwise marginalised that are particularly vulnerable.”

“This report shows the considerable economic and employment dividends for Europe in tackling climate change and fully implementing the Paris Agreement,” he added.

It follows a World Health Organisation report that found health benefits from meeting Paris Agreement targets could save millions of lives.

On a less optimistic note, the EU analysis highlights data released late last years indicating “carbon emissions are now accelerating at their fastest pace in seven years”. This “suggests global peak emission is not yet in sight”, it adds.

“This additional growth compares to a ‘business as usual’ baseline forecast, and contrasts with much commentary that claims that climate action would damage the economy,” the Irish environmental NGO said.

The report highlighted the economic benefits of implementing the Paris Agreement without further delay, and the positive growth implications for the European region, said Jennifer Higgins, policy and advocacy advisor with Christian Aid Ireland.

“Even though the projected impact for Ireland is moderate compared to some of our European neighbours, it is still positive.”

The results provided further evidence that the Government could not afford to adopt a wait-and-see approach to taking climate action.

“Adopting the necessary policy measures now will ensure that all of society can benefit from the move to a low carbon future, not just in terms of health and wellbeing but also economically,” she said.

The report demonstrated why legislation such as the Fossil Fuel Divestment Act (2018) and the Climate Emergency Measures Bill, which is currently in the Dáil, were central to shifting investment towards the green economy and green growth, said SCC policy coordinator Catherine Devitt.

“Passage of the Climate Emergency Bill will give investors a clear indication of Ireland’s commitment to the Paris Agreement, and where it intends to prioritise job creation and economic growth in the years ahead,” she said.