Spell of warm weather to continue into the weekend

This time last year country shivered ahead of big freeze 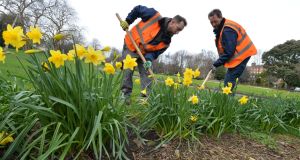 The unusual spell of warm mid-February weather is set to last into the weekend, Met Éireann has said.

Temperatures reached between 11 and 14 degrees on Thursday, for an uncharacteristically warm Valentine’s Day. Harm Luijkx, meteorologist with Met Éireann, said expected temperatures for mid-February would be between seven and nine degrees.

The good weather looks set to peak on Friday, potentially reaching 15 degrees in parts of the country. The spell of good weather is due to southerly winds bringing “sub tropical air” across the country, Mr Luijkx said.

The forecast for Friday, and into the weekend, is for dry conditions and sunny spells.

This time last year the country was facing into the start of the Beast from the East, with a forecast of wintry showers and daytime temperatures of no more than six degrees Celsius. Fast-forward 12 months and Met Éireann is forecasting dry weather with cloud and hazy sunshine.

Thursday was “mostly dry”, with clear spells and some mist patches, with no more than the “odd spot of drizzle” in western and southwestern coastal districts.

Friday is set to be dry in many areas for most of the day, the national forecaster said. There would be sunny spells, most prolonged in the east.

“Cloud will gradually thicken from the Atlantic, however, and outbreaks of rain and drizzle will develop in Atlantic coastal counties, with a few spots spreading elsewhere in the evening,” Met Éireann said.

“Mild, with maximum temperatures 12 to 15 Celsius, in moderate to fresh southerly winds, strong along Atlantic and eastern coasts,” the forecaster said.

Met Éireann said the outlook into the weekend is for mainly dry, settled weather to continue with some rain and drizzle at times, or scattered showers, mainly in Atlantic coastal counties.

This mild weather was “not totally unusual” for the middle of February, Mr Luijkx said. There was “no sign of the cold weather coming back” in the next number of days, he said.

Average temperatures for this time of the year “would be between seven and nine degrees,” he said and temperatures “will probably stay above the usual average, ” over the coming days.

The maximum temperature recorded at the weather station in the Phoenix Park last Valentine’s Day was 11 degrees, with just under nine degrees recorded in 2017, and seven degrees the year before that.

The outlook for next Monday is bright and dry, with some scattered rain showers in the west of the country, Met Éireann forecast. It will be a “little cooler and fresher” than previous days, with maximum temperatures dropping down to between seven and 10 degrees. Monday night is set to be cold, with temperatures possibly as low a minus two in Leinster and east Munster.