The Irish Times view on carbon taxes: waking up to the threat 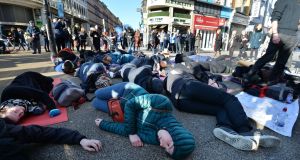 The Oireachtas Committee on Climate Action has held a series of public hearings on how Ireland’s carbon emissions can be reduced. It has gathered advice and expertise, including from leading climatologists who underlined the need for swift, unprecedented actions to decarbonise our economy and society.

Asked to consider how recommendations on climate change from the Citizens’ Assembly can be adopted, the 22-member committee has an onerous task and is due to issue its report shortly. The committee is also seeking to reach cross-party consensus around the Government’s own climate plan. Of late, it has been trying to reach a position on carbon tax. The latter is a proven way to change polluting behaviour while reducing emissions, even where a fee for fossil fuel usage is levied and a dividend is given straight back to householders in a revenue-neutral way.

The committee’s questioning and competence were commendable. But since moving into closed session, divisions have begun to emerge and some elements appear to be contemplating incremental climate actions when radical measures are needed. Some members have put down red lines on increasing carbon tax.

At the same time, new evidence shows that global warming is accelerating and its effects are likely to be increasingly chaotic and destructive. Global temperatures in 2018 were the fourth warmest on record, adding to a stretch of five years that were collectively the hottest period since modern measurements began.

Melting ice sheets may cause “climate chaos” and not just sea level rises, according to new projections. Climate change is also contributing to dramatic declines in insects which could see 40 per cent of species become extinct within decades.

Of most concern is that the political system seems incapable of dealing with – or simply does not want to face up to – the scale of cross-sector actions needed to close Ireland’s emissions gap.

Climate action committee chairwoman Hildegarde Naughton has indicated she wants an ambitious plan which future generations will acknowledge was important in getting Ireland on track. She has backed the fee and dividend approach, provided there are supports for those who might be unfairly penalised.

Delay in coming to a position on carbon tax is surmountable provided the issue is addressed before the next budget. Carbon tax is not a silver bullet but its absence will seriously undermine the State’s mitigation strategy and make it impossible to achieve what has been promised under the Paris Agreement.

Moreover, it will lead inevitably to vastly increased costs in pursuing less proven measures – an outcome that would place an outrageous penalty on coming generations.