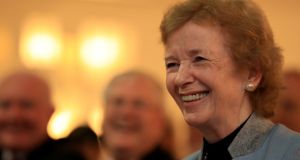 Former president Mary Robinson: ‘This is really very serious and we don’t have much time.’ Photograph: Donall Farmer/The Irish Times

Former president Mary Robinson has signalled support for Taoiseach Leo Varadkar’s tentative approach to imposing a carbon tax that would mean a “carbon cheque” for households to compensate for an increased levy.

She said that the “beginnings of real Government attention” to climate change issues, are evident even though “we don’t have a strong government position to take urgent action very quickly”. The former president’s remarks came in an address at Trinity College Dublin to launch the university’s green week,

While Mrs Robinson had been disappointed by the failure to progress plans for a carbon tax in last October’s budget, she now believes it was “possibly a wise move” following widespread protests against increases in carbon taxes in France.

“I was critical at the time. But when you see what happened in France with the gilets jaunes, [French president Emmanuel] Macron made the right decision of putting up a carbon tax but in the wrong way,” she said. “There is a way putting on a carbon tax, which is to pay a dividend. So you pay your tax but you get your dividend back. It doesn’t go off to some abstract government somewhere and you feel you’ve been unfairly taxed.”

Mr Varadkar said last year that he would consider giving a carbon cheque to households or individuals as part of a way of lessening the impact of a carbon tax.

Mrs Robinson said it was vital to manage the transition to a lower carbon future in advanced economies by putting fairness at the core of the climate policy agenda, otherwise governments risked alienating their electorates.

Referring to the recent decision to close peat production from some Irish bogs, which she supports, Mrs Robinson said that nonetheless “there are 400 people with their families and their community who are bearing the brunt of it. What measures are we taking to have a just transition?”

The former president added that “you’ve got to do it in a way that doesn’t bring dislocation like we’re seeing in France at the moment with the gilets jaunes. This is really very serious and we don’t have much time; we have to make it visibly fair with a just transition or it won’t happen.”